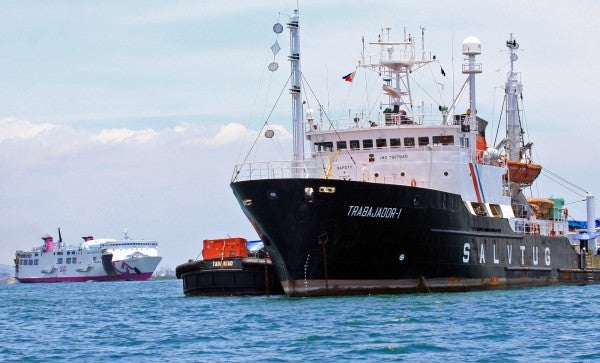 OIL SIPHONING VESSEL The MV Pope John Paul II of 2go Shipping (left) pass by before the Siphoning vessel of Malayan Towage while their technical divers started to putting on pipes on the sank ill-fated St. Thomas Aquinas siphoning operation of the remaining oil in the vessel at Lawis Ledge. JUNJIE MENDOZA / CDN

CEBU CITY—A passenger ship hit a cargo vessel while navigating its way out of the Mactan Channel at 10 a.m. Friday but proceeded on its voyage after ascertaining that neither vessel had suffered any serious damage and that no one was injured in the incident, the Philippine Coast Guard station in Cebu said.

The cargo vessel MV RKK 2, which had dropped anchor about 500 meters from Pier I in Cebu City, sustained only minor damage to its railing, said Coast Guard station commander Weniel Azcuna.

He said MV Pope John Paul II, operated by the 2GO shipping company, left Pier 6 about 9:30 a.m. for Cagayan de Oro City with an undetermined number of passengers and crew aboard.

The ship had to slow down while exiting the channel because of an oncoming ship, Azcuna said. However, the maneuver caused the ship to slightly veer off course due to the strong current, grazing MV RKK 2 and damaging a section of the cargo vessel’s railing.

The MV Pope John Paul II proceeded to its destination after its skipper, Capt. Ricardo Ababa, ascertained that his vessel suffered no damage, Azacuna said

The Coast Guard officer said Ababa was required to submit a marine protest, which is how reports of maritime accidents are called, to the Coast Guard as soon as his vessel arrives in Cagayan de Oro.