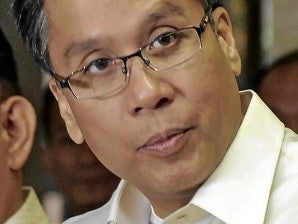 MANILA, Philippines—Interior Secretary Mar Roxas on Thursday hit back at the lawyer of the owner of the condominium unit that was damaged in the gas explosion at the Two Serendra residential building in Taguig City.

Roxas denied the allegations of lawyer Raymond Fortun that he was virtually acting as a lawyer for Ayala Corp., the condo developer, during the investigation of the May 31 blast which an inter-agency task force blamed on Fortun’s client, Marianne Cayton-Castillo, the owner of Unit 501-B at Two Serendra.

The interior secretary said Castillo’s lawyer “obviously … has not read the entire report” of the task force, which concluded that the explosion was triggered by a gas leak from the building’s liquefied petroleum gas (LPG) distribution system.

“Please stop misinforming the public. While he has to defend his client, but please, not at the expense of truth and verifiable facts,” Roxas said.