Bringing sexy back backfires on DENR 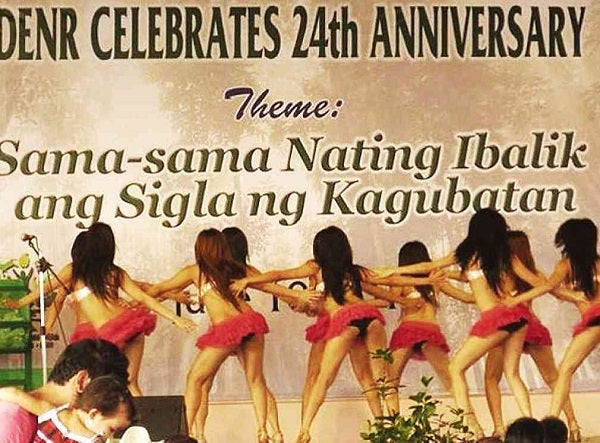 FOREST ‘FIRE’ This photo taken in 2011 by a DENR employee and posted on Facebook has come back to haunt department officials who allowed the sexy dance number during their 24th anniversary program.

A photo of skimpily clad women dancing onstage during an anniversary program of the Department of Environment and Natural Resources (DENR) in Quezon City has gone viral, drawing criticism and putting DENR officials on the spot.

The picture, taken in 2011 and its authenticity confirmed Thursday by department officials, surfaced online at a time when the DENR had come under scrutiny for its spending, particularly on catering services for seminars and conferences.

It shows the women with their backs to the camera and doing a sexy number, with a stage backdrop that reads: “DENR Celebrates 24th Anniversary.  Theme: Sama-sama Nating Ibalik ang Sigla ng Kagubatan (Together, let us bring back the vitality of the forest).”

It was uploaded on Facebook by an employee of the DENR-National Mapping and Resource Information Authority (Namria), and shared by hundreds of users on the social networking site as well as on Twitter.

As of noon Thursday, more than 750 Facebook users have spread the photo originally posted by Rowel Razal of DENR-Namria and shared by environmentalist Fredd Ochavo.

It drew mostly negative reactions from netizens, many of whom questioned the propriety of having such performances at an official government event.

“This is patently antiwomen! This calls for a stricter review of the DENR budget in Congress and an investigation of its gender policies,” said Rep. Emmi de Jesus of the women’s advocacy group Gabriela, in a message on Twitter.

DENR-Protected Areas and Wildlife Bureau Director Theresa Mundita Lim said on Facebook: “I don’t recall this performance in the central office, and (it) looks inappropriate to me.”

Environment Secretary Ramon Paje, who was in Japan for the signing of the Minamata Convention on Mercury, was not available for comment.

But in a statement issued to the Inquirer, Environment Assistant Secretary Corazon Davis said the “dance performance” was “not part of the approved program.”

Davis, who served as overall chair of the DENR’s 24th anniversary celebration, said that after the program in 2011, Paje came to know about the performance and “quickly reprimanded” the programs committee head, Director William Ragos, for allowing “such unauthorized and improper performance.”

“The dance number was apparently squeezed in the program as a surprise intermission and performed after the secretary had left. The secretary also reminded DENR officials and employees on the observance of proper decorum and ethical standards for public service,” the DENR said in the statement.

The controversy comes on the heels of a Commission on Audit report taking the DENR to task for spending more than P22 million for catering services in 2012 despite having a budget of only P704,000.

The report, released Friday last week, said the Office of the Secretary overspent by nearly P21.4 million for food served in seminars, workshops and conferences, or more than 3,000-percent higher than the allotted budget.

But Davis, the assistant secretary for administration and finance, noted that Paje’s office was composed of four bureaus and 16 regional offices, and that it saw an average of two meetings a week in 2012.

She said the agency had been trying to limit expenses by holding seminars and conferences at the social hall of the DENR’s central office, instead of holding them in hotels. This had substantially reduced the agency’s spending for hotel accommodations, Davis stressed.

Hotel bookings would cost about P1,800 per participant, while having events in the central office would cost only P800 per person, she said.

Davis admitted there had been “certain abuses” to a limited degree, but that the agency was already taking steps to economize.

Food expenses, for example, have been reduced from P300 to P220 per meal. Limits have also been set on the number of seminar or conference participants.