Group identified with Napoles gets pork coursed through DA 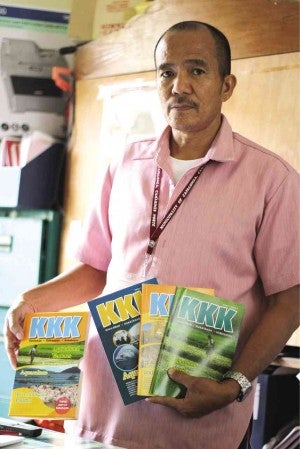 DAET, CAMARINES Norte—Millions of pesos of public funds credited to the pork barrel of former Rep. Renato Unico (first district, Camarines Norte) made a stop at the office of Agriculture Secretary Proceso Alcala and ended up in the coffers of a nongovernment organization that an earlier Inquirer report, quoting the Commission on Audit, described as one of the bogus groups created by Janet Lim-Napoles.

The group, Kabuhayan at Kalusugan Alay sa Masa Foundation Inc. (KKAMFI), held a supposed organic farming seminar for farmers in Capalonga, a town in Camarines Norte where the pork-funded project was implemented. Funds for the project went through Alcala’s office.

In the two occasions, Orit said he invited a total of 200 farmers, who were each provided with a bag of earthworms, a plastic bin, eight packs of vegetable seeds, a seedling tray and “books.”

Orit said the farmers were provided with snacks and lunch during the seminar. He said one farmer appeared to have been successful in propagating the earthworms.

“From a bag of earthworms, the farmer has produced two sacks of earthworms,” said Orit. He said he hasn’t checked the other farmers’ progress in the earthworm project. He said his office had been given short notice for the seminars.

Officials from the Department of Agriculture’s regional office, however, had told Orit that a team from the DA central office was to conduct an audit of the KKAMFI project on Aug. 26.

Orit declined to be quoted on record regarding the prices of the organic kits that were distributed to farmers during the KKAMFI seminars.

Minnie Londres, a staffer of Unico in the former congressman’s district office in Talisay town, had confirmed that KKAMFI implemented the DA organic farming program funded through Unico’s pork.

Londres said KKAMFI is based in Manila and is legitimate. A check at the Securities and Exchange Commission (SEC) website, however, yielded no information about KKAMFI.

But a report in the Inquirer, by Gil C. Cabacungan, identified KKAMFI as subject of a Commission on Audit investigation, being one of several alleged bogus NGOs created by Napoles.

Municipal agriculture officers of the towns of Labo, Jose Panganiban and Paracale, identified as beneficiaries of Unico’s pork, said they were clueless about the projects listed as implemented by the DA and funded by pork.

Virginia Z. Delos Reyes, officer in charge of the municipal agriculture office of Jose Panganiban town, said she does not know of any project funded by Unico’s pork. “It must have been projects I heard of in other towns,” she said.

Danilo A. Enova Sr., municipal agriculturist of Paracale town, said he, too, is unaware of the projects. He said, though, that his town has a “continuing program in organic farming” in coordination with the DA and in line with the implementation of the Organic Agriculture Act of 2010.

Gil Salen, municipal planning development officer of Paracale, said he, too, is unaware of the pork-funded projects implemented by the DA in his town.

He said the town gets funds from the DA but these are for a food terminal or farm-to-market roads. Funds for a tilapia hatchery project, which the town requested in 2012, have not been released, said Salen.

Victor V. Zabala, municipal agriculture technician of Labo town, said he, too, is in the dark on the pork projects supposedly carried out by the DA in the town.

Read Next
Glitch happens, farmers awed by loan data told by bank
EDITORS' PICK
Lacson wants DOF to suspend TRAIN law as oil prices rise
Delivering delight against all odds
153 protests filed vs China actions in PH waters in 2021 — DFA
Leaked: A 60x Zoom and all-new Helio G96 mean a complete overhaul for TECNO Mobile’s new CAMON 18 series
Next level mobile photography within reach with vivo X70 co-engineered with ZEISS
Duterte blasts rights groups for overlooking the ‘other side’ of drug war
MOST READ
Robredo to supporters: Be calm, gentle and do good deeds
Duterte inaugurates P684-M bypass road project in Quezon
Matibag calls Senate budget hearing ‘political,’ gets kicked out
Duterte: No drug dealers among the rich in PH
Don't miss out on the latest news and information.