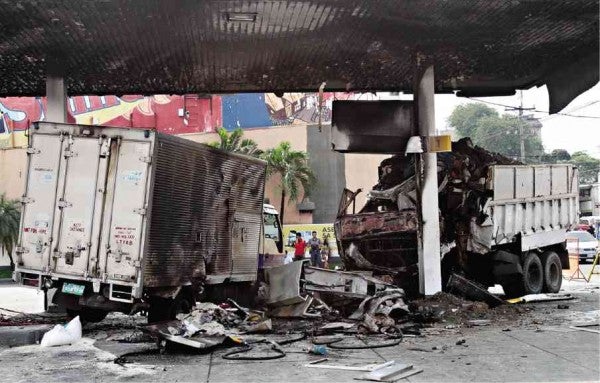 SCORCHED vehicle parts are strewn around a gasoline station on MacArthur Highway in Valenzuela City after a dump truck (right) crashed into a gas pump, causing a fire. Two people were killed in the accident. GRIG C. MONTEGRANDE

Two men were killed while two others were injured in a fire caused by a runaway dump truck that crashed into a gas station on MacArthur Highway in Valenzuela City on Tuesday morning.

Supt. Mel Lagan, chief of the city fire department, said that the truck driver, Ramon Gabayan, died on the spot when he was engulfed by flames after he was pinned inside the wreckage.

Gasoline boy Jonathan Mifuel was rushed to a nearby hospital but he died due to the severe burns he sustained in the fire.

Injured on the other hand were truck helpers Raymond Pulay and Tomas Martin who suffered burns as they were with Gabayan inside the vehicle when it crashed into the gasoline station.

According to Lagan, the accident happened at the Shell gasoline station on the northbound side of the highway at 2 a.m. Tuesday.

Just minutes before, the dump truck collided with another truck which was carrying plywood.

“The dump truck then skidded along the highway before eventually crashing into the gasoline station,” Lagan said.

The vehicle hit one of the gas pumps, detaching it from its base and causing a fire to break out in the station.

The police said the blaze was put out about an hour after the accident. A closed truck that was in the gas station was also damaged in the fire.