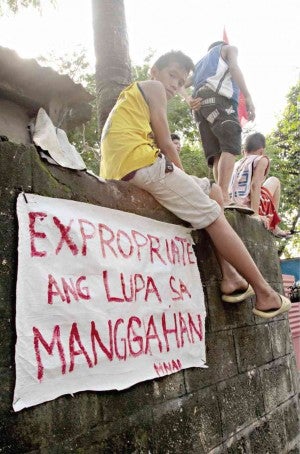 Families squatting on the Royal Compound property in Mandaluyong City make their sentiments known on placards displayed in the area as they protect their houses from a demolition team. GRIG C. MONTEGRANDE

Informal settlers living on a disputed piece of land in Mandaluyong City formed a human barricade on Monday in anticipation of the arrival of a demolition team.

As early as 6 a.m., around 100 residents carrying placards reiterating their right to keep their houses on the 17,694-square-meter Royal compound on Rev. Aglipay Street in Barangay (village) Old Zaniga positioned themselves in front of the area.

They were expecting the demolition team to arrive at 8 a.m. but although they waited way past the hour, none arrived.

According to Dan Ramirez, spokesman of the Manggahan Neighborhood Association of Old Zaniga of Mandaluyong Inc., they were guarding against the demolition of their houses after the 10-day notice to vacate and pay and the writ of execution issued by a court lapsed.

The orders stemmed from a case filed years ago by Royal Enterprise Inc., owner of the property, against some of the residents.

Ramirez said the land, however, had been awarded by the company to the city government by virtue of a resolution approved by the local council in 1994 when Benjamin Abalos Sr. was still mayor.

He claimed that the families then were told the lot would belong to them upon payment of a specific amount for 25 years.

“We are contesting the land title and we’re asking for a dialogue,” Ramirez said, as he reiterated that no relocation site had been given to the affected families, which now number around 500.

“The only thing we were promised was financial assistance [both from Royal Enterprise and the city government] but we still don’t know how much,” he added.

Sought for comment, Mayor Benhur Abalos, Abalos Sr.’s son, said over the phone that the “agreement” between Royal Enterprise Inc. and the city government covered only half of the 17,694-sqm property.

The firm agreed to give half of the land to the city government on the condition that the other half would be “cleared” of illegal settlers.

“But they’re hardheaded. Around five to eight families stayed behind [in the cleared property] and they rented [portions of the lot out] until the number of residents grew. That’s why a case was filed against them,” Abalos said.