PH eagles in ‘flight of romance’ 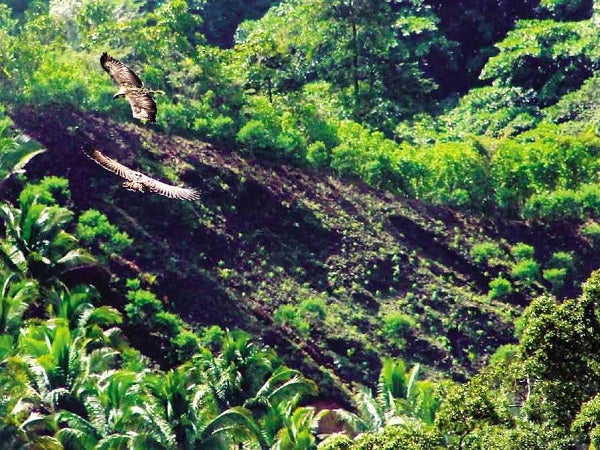 Liza Jane Estaño, chief of the provincial environment management office (Pemo), said in a news release that a pair of Philippine Eagles was sighted on Sept. 9 in the mountain range of Barangay Linay of Baliguian town, a five-hour drive southwest of the provincial capital of Dipolog City.

“The birds were found mating in a forested area that can be reached after a three-hour hike from the town center,” Estaño said.

The Philippine Eagle (Pithecophaga jefferyi) is a critically endangered species endemic to the tropical forests of the country. Its population has been decimated due to massive deforestation and hunting, according to the Philippine Eagle Foundation based in Davao City.

In 1995, then President Fidel Ramos declared the Philippine Eagle a protected species. The Philippine Wildlife Act has since provided measures aimed at protecting the remaining population of the national bird, as well as other wildlife species.

Authorities were informed about the presence of the eagles in Baliguian by barangay councilor and farmer Fernando Mendoza Sr., who claimed to have first seen the eagles in 2003, Estaño said. Local residents have since named one of the eagles Fernando.

Based on Mendoza’s account, the pair managed to produce an eaglet, but that he had not seen them for several years.

Mendoza, along with his son Fernando Jr., guided a team of six people who documented the eagle sighting in the area. The group included Estaño, Levy Lagutin and Von Basil Lambo of Pemo; Al Caabay of the Regional Eagle Watch Team of the Department of the Environment and Natural Resources in Western Mindanao; and local photojournalists Sammy Amatong and Dave Magdayao.

“Early morning of Sept. 9, we waited for the eagles to emerge from the canopy of trees. After three hours, lo and behold, one of the eagles glided toward a fallen tree, then was joined shortly by the other one,” Amatong told the Inquirer by phone.

He said it was his first time to see the Philippine Eagle more closely in the wild.

Using telescopes, the team traced the eagles to their nest. And judging from the birds’ behavior that day, the team supposed that the eagles were mating, Estaño said.

Amatong related that during the daylong watch under sunny skies, the team was treated to varying “magnificent sights” of eagles in flight. These included an “aerial courtship display” over a forested ridge, a “mutual soaring display,” and a “flight of romance” before they flew back to their tree nest.

Estaño said she and other officials were pushing for the provincial legislative board to declare the Linay mountain range the “Eagle National Park of Zamboanga del Norte” to pump-prime the rehabilitation and development of its natural ecology “for the sake of the pair of eagles and other rare and endangered species found there.”

The mountain range hosts a stretch of lush forests that have withstood the onslaught of logging activities since the 1960s.

Tarsiers, wild pigs and squirrels have also been sighted in the forests, Estaño said.