Bomb hidden in box of durian intercepted in North Cotabato 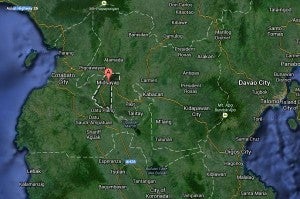 MIDSAYAP, North Cotabato, Philippines—With the help of alert civilians, police intercepted on Saturday an improvised explosive device hidden in a box of durian being unloaded outside a hotel and restaurant here by a man on a motorcycle, foiling what might have been a bloody act of terrorism.

Superintendent Renante delos Reyes, Midsayap police chief, said Abdulgani Malang Abas, 42, who is now considered a suspect, was intercepted following a tip from civilians who saw wires protruding from underneath two durian fruits as he parked his motorcycle near the hotel Hill Park and Restaurant on Quezon Boulevard at 11:45 a.m.

Abas, who claimed to make a living by transporting people and cargo on his motorcycle, appeared startled when asked why he was carrying a bomb, Delos Reyes said.

During investigation, the motorcycle driver claimed the box was owned by a woman who had hired him to drive her to Quezon Boulevard, Delos Reyes said.

According to Delos Reyes, Abas told investigators that on arrival, the woman told him she needed to buy something from a store but did not return. Since he did not want to be delayed any further and he wanted to find more passengers, Abas decided to unload the box and leave it by the roadside.

“It was when residents saw him,” Delos Reyes added.

He said the improvised bomb was fashioned from a 60-millimeter mortar shell fitted with a timer as triggering device.

He said investigators were reviewing video from the hotel’s closed-circuit security camera to find out if Abas indeed had a companion when he arrived there.