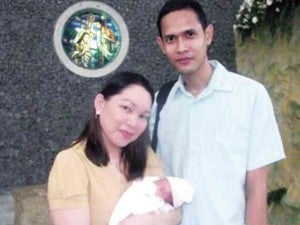 ROWENA Canizares and husband, James, had Felicity Pearl baptized on April 3, 2013, just nine days after the baby was discharged from the hospital. CONTRIBUTED PHOTO

Rowena Canizares felt her heart freeze when she saw her daughter in the hospital’s neonatal intensive care unit (NICU) for the first time.

Born eight weeks too early on the eve of Valentine’s Day, Felicity Pearl was no bigger than an 8-ounce soft drink bottle and weighed only 900 grams. Canizares feared that just like her first two babies, Felicity Pearl might be taken away from her.

“It was very traumatic for me, seeing her so tiny and fragile. I could not bear losing another child, so I had to do everything to make this third baby survive,” Canizares said.

Her first, born premature at 36 weeks, died of necrotising enterocolitis (NEC), a medical condition seen in premature babies where the intestines become infected, resulting in death.

She lost her second baby from a miscarriage.

Concerned over her low birth weight and vulnerability to NEC, Felicity Pearl’s neonatologist, Dr. Ramon Najarro, prescribed that she be fed with nothing but breast milk.

Breast milk has species-specific components that are easily absorbed, even by a premature baby with an underdeveloped gut. Formula milk has cow’s milk as the main component.

In a 2012 policy statement, the American Academy of Pediatrics recommended feeding preterm infants with breast milk after random clinical trials performed from 1983 to 2005 showed that it reduced NEC cases by as much as 83 percent. NEC is the second most common cause of morbidity in premature infants.

But Canizares had a problem producing milk for her baby after suffering from preeclampsia, which prompted Felicity Pearl’s birth by caesarean section. She continued to suffer from high blood pressure in the weeks that followed.

She was forced to look for breast milk donors.

“My husband had to beg for milk from the other mothers at the OB (obstetrics) ward. We even asked for the leftover breast milk that the other babies in the NICU could no longer finish. When all that ran out, my sister-in-law asked for breast milk donors on Facebook,” she said.

The call for donors was shared on the social networking site and Canizares’ family was able to acquire breast milk from seven mothers, including a classmate from high school.

“We were so blessed. Many women helped so my daughter would live. She has a lot of mommies!” Canizares said.

While many might wonder why women would want to share their milk with strangers, the donors have a different sense of satisfaction with sharing.

“Not anybody can do it and the window of opportunity to do it is limited, too. Therefore, the happiness a donor-mom feels is amazing,” said Kristie King Luy of the Cebu Breastfeeding Club, a loose group of breast-feeding mothers who meet once a month to support new mothers who wish to exclusively breast-feed their babies.

The Facebook page of La Leche League-Cebu Breastfeeding Club, which started in March, has also become a venue for not just club meet-up announcements but also for calls for breast milk donors.

In fact, two of Canizares’ donors are club members.

Not one of the donors asked to be paid. They and the mothers developed a mutual trust. Mothers like Canizares, who rely on an informal milk sharing network, take the risks that go with raw and unpasteurized breast milk.

“My priority was my baby’s survival. I did not even stop to think whether the raw breast milk I was getting was contaminated or not. I trusted the mommy-donors, even though most of them were strangers. If the milk they are pumping is good enough for their own babies, then it should be good enough for mine,” Canizares explained.

Triathlete and engineer Lorhiz Echavez-Lopez, a regular breast milk donor for babies at the NICU, said the donors would pump milk for their own babies so recipients could be given assurance that great care had been put into its “production”—starting with what the donor-mom eats to how the expressed milk is packed and frozen.

When stored in a double door freezer, breast milk can last up to six months, and in a chest-type deep freezer, a year.

“I donate a lot and as a donor, I take extra care in packing my [breast milk]. I just trust other moms to do the same. But it would be really nice for moms to get tested for communicable diseases first [before donating]. Then again, that’s added cost,” Lopez said.

There is also something intimate in milk sharing because expressing milk is time-consuming.

“Giving away breast milk is giving a part of you and you only want to give it to those who really need it because it’s a matter of life and death for the ‘premies’ at the NICU,” Lopez said.

Government-run Vicente Sotto Memorial Medical Center is also setting up the first breast milk bank in the Visayas. The facility will have its own breast milk pasteurizer worth P1 million, which will come from the Priority Development Assistance Fund of Sen. Pia Cayetano.

According to Cayetano’s Twitter account, the pasteurizing machine would be delivered soon following its successful bidding in August, just before the Supreme Court issued a temporary restraining order stopping the release of the Priority Development Assistance Fund of lawmakers.

But women with premature babies cannot rely on donated breast milk forever. They must learn to secure their own supply and trust their own capacity to provide complete and sufficient nourishment for their newborn.

Luy said a woman with a baby in the NICU would need guidance on how to breast-feed and should be told not to expect “waterfalls of milk.”

The milk production may be little but it is enough for her baby, she added.

“Her milk is far superior to any formula out there and it is built specially for her NICU baby’s needs. For as long as the baby sucks at the breast, the milk will flow. There is no such thing as not enough milk. You just have to believe in yourself and trust your body,” Luy said.

Felicity Pearl stayed for 41 days at the NICU, feeding on donated breast milk and whatever milk her mother could pump from her own breasts. Saved by donated breast milk, she is now almost 8 months old and has started eating solids.