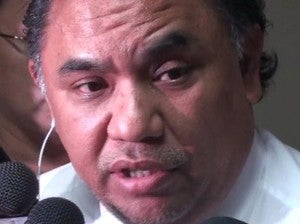 MANILA, Philippines—A former lawyer of then Chief Justice Renato Corona now feels vindicated after revelations of the Disbursement Acceleration Program (DAP) seemed to confirm his bribery allegations, which in 2012 resulted in him being cited for contempt by the impeachment court.

“Is it not surprising that everything I said then and the reports of the DBM (Department of Budget and Management) matched? They apparently knew it was true but I was the one accused of wrongdoing,” said lawyer Jose “Judd” Roy III, in an interview with Radyo Inquirer 990AM on Thursday.

In February 2012, at the height of the impeachment trial against the former chief justice, Roy claimed in a press conference that Executive Secretary Paquito Ochoa was offering senator-judges P100 million worth of projects in exchange for defying the Supreme Court temporary restraining order on the opening of bank accounts under Corona’s name.

A month later, Roy was cited for contempt and reprimanded by the Senate convened as an impeachment court.

“This court must assert its dignity and honor in these proceedings.  In effect, the defense panel suggests this court could be paid into making a decision and I do not think it is proper to even think about this impeachment court (this way),” Enrile said at the time.

On Monday, the DBM admitted that P50 million to P100 million under the DAP were released to senators, but only months after the trial. This came after Senator Jose “Jinggoy” Estrada implied that P50 million in funds were released as incentives to the senators for the impeachment of Corona.
Roy also said President Benigno Aquino III was wrong for saying there was no such thing as a “bribe after the fact.”

“That is wrong. (A bribe after the fact) is possible. Because the law says the mere promise is already an offense…It doesn’t matter when it was given. The promise (of a bribe) alone is a crime,” the lawyer said.

“I would like the Senate to apologize. I want the senate to withdraw that contempt order. Unfortunately, the impeachment court is no more,” Roy said Thursday.

He said what hurt him was that he was cited for contempt “because they (the senators) did not want him to tell the truth.”

“Why didn’t they call Secretary Ochoa…why didn’t they question Senator [Francis “Chiz” Escudero] who allegedly was the first to meet with Ochoa,” he said.

Roy, who still refused to name his source for security purposes, said they were not given much information at the time of the trial.

“What I can tell you now is that we actually did not know where the P100 million will be sourced…Well actually if you look at the DBM report (on the DAP), P100 million is exactly what some of the senators received,” Roy said.

Of those who voted to acquit the chief justice, Senators Ferdinand “Bongbong” Marcos and Miriam Defensor-Santiago got nothing while former Senator Joker Arroyo allegedly was allotted with P47 million but only this year.