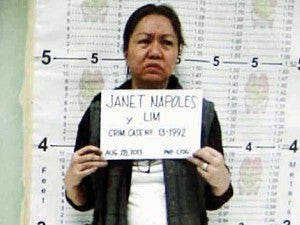 MANILA, Philippines—A personal aide of Janet Lim-Napoles tried to bring in P50,000 in cash to her detention facility in Sta. Rosa City, Laguna province, when she was taken there last month, the Philippine National Police said yesterday.

He said the incident happened when Napoles, the alleged brains of the P10-billion pork barrel racket, was transferred to the police camp from Makati City Jail on Sept. 1—four days after she surrendered to President Aquino in Malacañang, saying she feared for her life.

Sindac said the woman, who identified herself as Napoles’ aide, was not arrested.

“There was no reason for us to seize the money. The guards just prohibited her from bringing the cash inside the detention facility,” Sindac said in a press briefing at Camp Crame. He said the PNP did not see any malicious intent in the attempt.

“It happened on the first day of her transfer. Understandably, both the visitors and the jail guards were still getting used to the regulations,” he said, adding the aide probably thought Napoles needed the money for “personal necessities.”

Sindac dismissed as “speculations and hearsay” reports that SAF personnel had been allowing Napoles, who was ordered arrested in connection with the alleged illegal detention of principal whistle-blower Benhur Luy, to leave her detention facility to take a bath at night.

He also shrugged off rumors that the businesswoman had been allowed to use mobile phones. “She is being detained there and guarded by one of the best PNP units we have.”