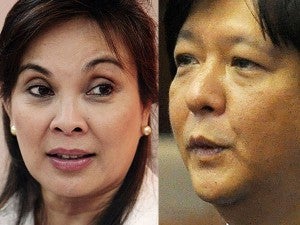 MANILA, Philippines – Senators Loren Legarda and Ferdinand “Bongbong” Marcos gave their “funds” to the alleged mastermind in the pork barrel scam through a common aide, a witness told the court Wednesday.

In her testimony before the Makati regional trial court, Merlina Sunas said one “Maya Santos”, a conduit for Legarda and Marcos, would go to JLN regularly to hand its owner, Janet Lim-Napoles, the requirements for the projects of the two senators.

The “funds” Sunas referred to was the Priority Development Assistance Fund (PDAF) or pork barrel of Legarda and Marcos.

“Ma’am Maya (Santos) goes to the office whenever they have projects funded by the senators. She hands Napoles the requirements for the projects,” she told the court that was hearing the bail petition of Napoles.

Sunas was a former employee of Napoles for 12 years.

She recounted the events that led to the detention of Luy by Napoles and her brother Reynald “Jojo” Lim before the Makati Regional Trial Court branch 150 presided by Judge Elmo Alameda.

A day before Luy’s detention, Suñas said the businesswoman gathered a few of her employees in an informal meeting. Those who attended the meeting at Napoles’ office at units 2501 and 2502 of Discovery Suites in Ortigas Center, Pasig City, included Sunas, Luy, a bodyguard of Napoles and two other employees of the JLN Corporation.

During the meeting, Napoles grabbed the phone of Luy from him and was stunned to see the text messages from a certain “Maya Santos.”

Santos was a project coordinator serving Legarda and Marcos who were among those implicated in the PDAF scam.

Suñas said the project coordinator regularly visited their Ortigas office whenever her bosses, Legarda and Marcos, “have funds.”

“Ma’am Maya (Santos) goes to the office whenever they have projects funded by the senators. She hands Napoles the requirements for the projects,” she said.

As Napoles read the exchange of messages between Luy and Santos, she fumed because the whistle-blower and the project coordinator were having a secret deal.

“Ikaw na kaibigan ko, ikaw pa ang nag-traydor sa akin! Kaya pala konti na lang ang PDAF na dumarating sa akin, meron palang hidden transaction si Benhur (Luy) at ibang chief of staff! (You who are my friend, you betrayed me! So this is why the PDAF I am receiving decreased because Benhur and other chiefs of staff transacted behind me!” Suñas quoted Napoles as  Suñas telling Santos.

Then Napoles turned to Luy and  yelled at him and called him “ahas” (traitor).

After the meeting, the infuriated Napoles told the security guard who Suñas identified as Napoleon Sibayan to bring Luy to another room and keep an eye on him.

Suñas said Luy was stripped by Sibayan and Lim of his belongings that included a wallet containing P40,000 cash and two car keys before being locked up in a room.

She added that Napoles, after their morning meeting, directed former JLN employee and now a whistle-blower Marina “Baby” Sula, to transfer Luy’s P800,000 personal savings deposited in a Metrobank account to the JLN Corp.’s bank account.

After the encounter between Luy and Napoles in the December meeting, Suñas said she only restored contact with Luy three months after his alleged illegal detention.