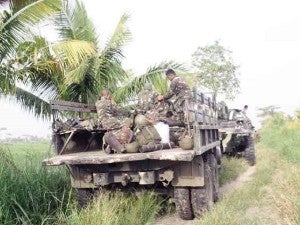 MLANG, North Cotabato—Classes in two villages here were suspended on Tuesday after 200 rebels of the Bangsamoro Islamic Freedom Fighters tried to occupy the communities, the military said.

A military report said government troops were battling the intruders in the villages of Lepaga and Gaunan.

At least 22 howitzer rounds had been fired by the government side into an area about three kilometers outside Lepaga, the report added.