For history teachers, a walk with bits of theater, humor | Inquirer News

For history teachers, a walk with bits of theater, humor 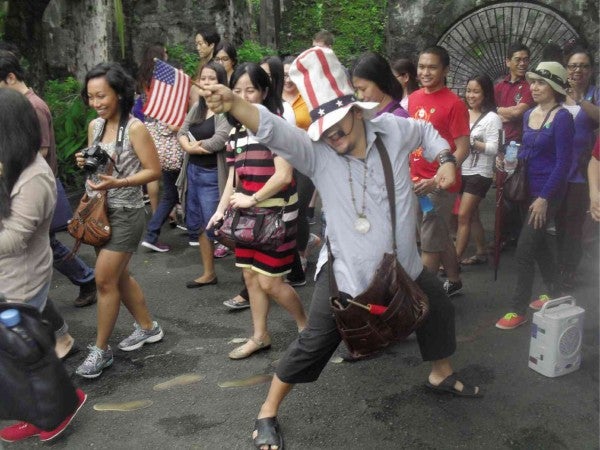 Around two dozen teachers from kindergarten to Grade 6, most of whom teach history, recently joined Celdran’s afternoon educational walking tour of the Walled City, Intramuros.

The teachers’ Walk This Way tour was part of May K sa Kasaysayan program initiated by the Museo Pambata to mark Teachers Month this year. 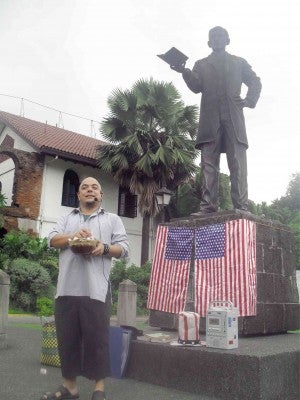 Celdran’s tour, which featured historical facts, comedy, costumes, critiques, music and theatrical elements, started at the gates of Fort Santiago with the singing of the Philippine national anthem.

With a top hat adorned with stars and stripes on his head and a pack of Chocnut in his hand, Celdran asked his guests to answer questions. Those who gave the correct answers  were rewarded “during recess” with the popular local snack.

He told everyone that the most important thing they needed for the duration of the tour was a sense of humor.

The teachers, as well as some foreign tourists, followed the barong-clad guide as he strolled in gay abandon into the fort as if he were the Pied Piper.

He talked about the Philippines’ precolonial past and the advent of Spanish colonization with the arrival of Ferdinand Magellan followed by Miguel Lopez de Legazpi in Manila in the 16th century.

“The Philippines is a work in progress,” he said. “We’re not as old as China.”

His storytelling was punctuated by an acerbic discussion of how the Philippines then was more a colony of the Catholic Church rather than of the King of Spain.

Celdran is a consistent critic of the Catholic Church. Earlier this year, a Manila court found him guilty of “offending religious feelings” after he disrupted an ecumenical service at Manila Cathedral to protest the Church’s opposition to the reproductive health law.

With textbook precision, he proceeded to tell the “tourists” about national hero Jose Rizal and the ensuing revolution, before moving on to the American occupation and the second World War.

He debunked myths, downplayed the “greatness” of Gen. Douglas MacArthur and recalled how the Americans bombed Manila, almost to complete destruction, to defeat the Japanese Imperial Army, making it second only to Warsaw, Poland, as the most devastated city in the world after the war.

He said, “I believe that Manila can be a reflection of your state of mind. Being a city of extreme contrasts, it can easily become an intense personal experience. Manila can be chaotic and spiritual, dirty and divine, gritty and gorgeous all at once. If you don’t find beauty and poetry here, you will never find it anywhere.” 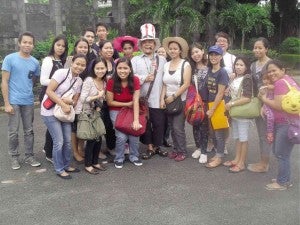 Celdran expressed the hope he could change the way people looked at Manila “one step at a time.”

He seemed to have achieved his goal with some of the guests that afternoon.

“My perception of Manila changed,” said Mariah Apacible, kindergarten teacher at Project 6 Elementary School in Quezon City. “I really learned a lot of things … Before, when I tackled history, it was kind of boring for me because most of what we claimed to be ours were actually taken from foreign cultures.”

“But later on I realized that they were part of our culture, too. If we don’t include these things, we might lose our identity.”

Apacible emphasized the importance of teaching history to the young.

She said, “If you don’t know your history, you don’t know who you are as well. It’s hard to share things about yourself if you really don’t understand what you are.”

Grade 4 teacher Carmelita Almasen agreed. “How can we call ourselves Filipinos if we don’t know our history?”

“I learned a lot from him (Celdran), even from his jokes,” she said. “I used to just depend on books for lessons I taught in class, but now my knowledge of history [has] broadened [because of this tour].”

Although Celdran believes history is “very important” as it “gives you handles on your identity,” he thinks it is being taught too early in the country. As a result, teachers tend to “oversimplify history” and reduce it to “numbers and memorizing national events.”

He suggested that history be taught only in senior high school or college.

“Philippine history is more complex. It’s more than just memorization of [important dates],” he said. “It really isn’t about good and bad because the Spanish were not always bad, the Americans were not always good; Marcos was not always bad and Cory was not exactly good.

“I think that we should be taught more analytically,” he said.