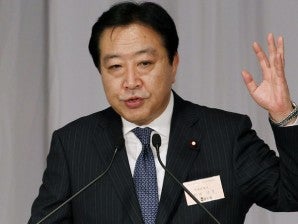 JAPAN’S NEXT PM. Finance Minister Yoshihiko Noda speaks shortly after he was elected as the new leader of the Democratic Party of Japan at a voting by the party lawmakers in Tokyo Monday, Aug. 29, 2011. Japan's ruling party elected Noda as its new chief Monday, paving the way for him to be the next prime minister. (AP Photo/Koji Sasahara)

TOKYO—Japan’s Finance Minister Yoshihiko Noda is set to become prime minister after winning a party vote Monday, taking on responsibility for rebuilding after the quake, tsunami and nuclear disasters.

Noda is expected to be confirmed in parliament Tuesday as the nation’s sixth new premier in five years, replacing outgoing Naoto Kan, who quit last Friday after his approval rating tumbled over his handling of the triple crisis.

Known as a fiscal hawk and a safe pair of hands rather than a charismatic leader, 54-year-old Noda has pledged a “middle-of-the-road” politics.

He promised to push for a speedy recovery from the March 11 disaster and its economic impact, and vowed to unite the deeply divided ruling party so that “everyone works together for the sake of the people.”

Noda angered Japan’s neighbors, including South Korea, weeks ago when he said on the anniversary of Japan’s World War II surrender that Class-A war criminals convicted by an Allied tribunal were in fact not war criminals.

The son of a paratrooper in the Self-Defense Forces, Noda, a married father of two, holds broadly conservative views, opposing the granting of voting rights to ethnic Korean permanent residents living in Japan.

Noda emerged as the winner of the five-way contest within the center-left DPJ when he gained 215 votes in the second-round ballot, against 177 for the trade and industry minister, Banri Kaieda.

As Kan’s finance minister, he has led mixed efforts to revitalize an economy plagued by decades of deflation and struggled to bring down huge public debt and a strong yen, near post-war highs, that is hurting exporters.

Making his final pitch Monday, he pointed at the debt and economic woes in the United States and Europe that pose a threat for Japan, the world’s third-biggest economy after China.

“In this global current, the question is who will be able to navigate this ship called Japan without losing its course, and say what Japan should say in the arena of international negotiations,” he said.

Of stocky build, he admitted that he may lack the telegenic looks of other politicians, but promised steady leadership.

“I am a loach. I can’t be a goldfish,” he said, contrasting a whiskered fish to the shiny ornamental variety.

The close contest, which reflected a bitter fight within the DPJ, came amid public disenchantment over the government’s response to the March 11 quake-tsunami disaster and the resulting Fukushima nuclear accident.

Outgoing leader Kan on Friday confirmed his resignation after 15 turbulent months in office, after his approval rating had plummeted from a high of 65 percent to just 15 percent.

The DPJ, which took power two years ago in a landslide, ousting the long ruling conservatives, is deeply split between supporters and enemies of scandal-tainted Ichiro Ozawa, dubbed Japan’s “Shadow Shogun.”

Ozawa commands the loyalty of about 130 lawmakers, many of whom he coached in electioneering and helped get elected.

The defeat of the Ozawa-backed candidate, Kaieda, was a setback for the powerbroker who last year lost a contest against Kan and has since been stripped of his party membership after being indicted over a funding scandal.