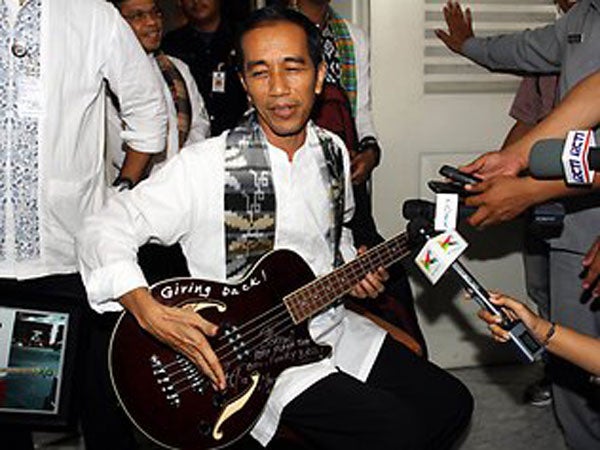 Jakarta governor Joko Widodo (R) holding a maroon bass guitar gifted to him by Robert Trujillo of US band Metallica before turning it over to Indonesia’s anti-corruption agency on May 3, 2013. AFP FILE PHOTO

JAKARTA – Wearing a black T-shirt and leather jacket, the governor of Jakarta thrusts his fist into the air among a sweat-soaked, headbanging crowd at a concert by rock band Metallica.

If being among the people is unusual for an Indonesian politician, doing so at a heavy metal gig is one of the reasons 52 year-old Joko Widodo has quickly risen to the top of opinion polls as a figure regarded as outside the establishment.

“I listen to loud metal songs, from Metallica to Led Zeppelin, to Napalm Death… because rock is my passion,” the skinny governor of the Indonesian capital, popularly known as “Jokowi,” told AFP ahead of the concert.

The city chief’s laid-back demeanor hides a potent political force and is part of the down-to-earth charm that has captivated the nation and shaken up a political arena dominated by aloof figures from the era of dictator Suharto.

Just one year after being elected, the man who was born in a riverbank slum is favorite to become Indonesia’s next president at elections in 2014, despite not having declared his candidacy.

“He is different from other powerful figures who don’t care about ordinary people,” 32-year old Metallica concert-goer Rizqi Widyasari told AFP, echoing the sentiments of many who are delighted to have a leader with the common touch.

But despite the euphoria, some question whether a man who has never worked in national politics is ready to take on the challenge of running a sprawling archipelago of 17,000 islands with a population of more than 240 million.

He will not be drawn on whether he will run for president, insisting that the decision is up to his party and his focus remains on sorting out traffic-clogged, flood-prone Jakarta’s problems.

However pressure is mounting on Widodo, who rose to prominence during a successful stint as mayor of Solo in Central Java province and whose hands-on approach has endeared him to a nation weary of corrupt political elites.

When traveling through Jakarta recently he had no qualms about jumping out of his car and onto a motorbike taxi to beat the traffic, unlike the majority of Indonesia’s elite political establishment who opt for motorcades.

During his regular visits to the city’s teeming slums and rat-infested alleyways, he listens to people’s complaints and checks whether government officials are doing their jobs properly with surprise inspections accompanied by journalists.

He inaugurated the new mayor of an east Jakarta district on a rubbish dump, to highlight that local leaders were not afraid of getting their hands dirty as they seek to clean up the capital.

“The problems are obvious – we just need to get on with it and to implement the policies we have laid out,” he said during an interview at his office, where screens monitoring the city’s traffic hang on the walls and files are stacked up on desks.

He has made a start on tackling Jakarta’s problems, from regulating Southeast Asia’s biggest textile market that is controlled by shadowy groups to starting public transport projects and seeking to improve health and education services.

With his humble upbringing – he is the son of a carpenter – and clean image, Widodo is a stark contrast to most leading politicians in Indonesia.

They tend to be moneyed tycoons, former army generals – like current President Susilo Bambang Yudhoyono – or scions of wealthy political dynasties. Many have roots in the deeply corrupt three-decade rule of Suharto, who was forced out in 1998.

The two men seen as the most likely challengers have been on the political scene for years.

Prabowo Subianto is a former head of Indonesia’s special forces who was accused of rights abuses in East Timor, while Aburizal Bakrie is a businessman who has been embroiled in numerous controversies.

However, they don’t appear to stand a chance in the face of the “Jokowimania” sweeping the country, according to recent polls.

A survey by the respected Kompas newspaper conducted in May and June showed him winning the presidential election with 32.5 percent of the vote, up from 17.7 percent in December.

In recent surveys, he has scored at least 10 percentage points more than his nearest challenger.

The groundswell of support for Widodo is “so strong that it would be difficult for anyone to stop him becoming president,” said Syamsuddin Haris, a political expert from Indonesia’s Institute of Sciences.

His party, the opposition Indonesian Democratic Party of Struggle (PDI-P), has yet to nominate him as their candidate — although analysts say the party simply does not want to show its hand so soon before the July 2014 elections.

But while Widodo has generated a lot of publicity, there are signs that his efforts to sort out Jakarta are already hitting trouble.

He has faced criticism over plans to evict residents living in slums around a dam in north Jakarta, and the city’s traffic problems seem as bad as ever despite a flurry of public transport projects.

There are also serious concerns over a potential Widodo presidency, with some unconvinced that a year running a city of 10 million is enough preparation.

Winning fights with veteran political heavyweights could be tough for an outsider, as could battling endemic corruption in one of the world’s most graft-ridden nations, some analysts say.

In a recent comment article, the Jakarta Post newspaper questioned whether “a politician from a small town in Central Java with no links whatsoever to the political powers of the past… has what it takes to survive the onslaught of the old but powerful establishments.”

There are also signs that Widodo does not really want to become president and spend his days surrounded by the country’s most powerful people.

At the Metallica concert last month in Jakarta, he looked distinctly uncomfortable mingling with the rich and powerful in the VIP area – and insisted he would prefer to be among the crowd.