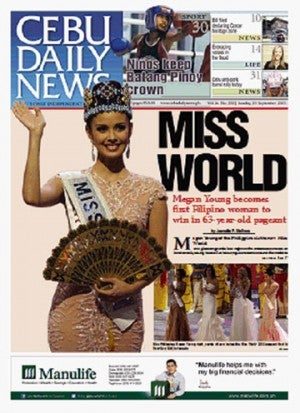 Megan Young of the Philippines is the new Miss World.

In a glittering finale last night at the Indonesian resort island of Bali, Young bested 128 beauty queens from around the world to win the coveted title in a contest broadcast to more than 180 countries worldwide.

Young, who took the crown from Wenxia Yu of China, the 2012 winner, was born in the United States. When she was 10 she moved to the Philippines, where she has appeared in films and  television.

Miss World organizers had earlier agreed to cut bikinis from the swimsuit competition, replacing them with more conservative sarongs. But pressure continued to mount, and more mainstream groups joined in and called for the show to be banned.

Indonesia’s government announced three weeks ago that the final would be moved from the outskirts of the capital, Jakarta, and instead held on the Hindu-dominated resort island of Bali, where earlier rounds were taking place.

After getting crowned, Young thanked the judges for choosing her and promised to “be the best Miss World ever.”

The 23-year-old Filipino actress pledged to “just be myself in everything I do, to share what I know and to educate people.”

Before her, no Filipina had won the prestigious crown in the 63-year-old London-based pageant.

A pre-pageant favorite, Young bagged the Top Model Award and also  topped  the Beach Fashion Challenge.  Young had to defy speculations of an impending disqualification because of near-naked photos published in a magazine, the same ones that cost her a slot in the Binibining Pilipinas contest.

Filipinos cheered as Young was called to the top ten finalists,  and more so as she moved to the top five alongside France, Ghana, Brazil (Sancler Frantz Kouzen) and Spain (Elena Ibarbia Jimenez).

Young’s answer to the final question on why she should be crowned Miss World: “I treasure a core value of humanity and that guides her into understanding people, why they act the way they do, how they’re living their lives. And I will use these core values and understanding not only in helping others but to show other people how they can understand others, to help others. … So that as one, together, we shall help society. Thank you!”

Young had shown great promise early in the pageant, having been handpicked to speak at the Miss World Press Launch along with only eight other contestants, and one of the selected few to have a solo performance at the Dances of the World where she danced the singkil, a traditional Filipino Muslim dance.

News of her victory was like sunshine to the country which is hounded by flooding in many parts of the capital, an armed conflict conflict in Mindanao and the corruption issue of pork barrel funds that rocked the government and citizenry.

Miss World was first created in the UK in 1951 and is one of the oldest international beauty pageants. This year’s pageant was the 63rd.

Last August, the Olongapo City native bested 25 other contestant during the Miss World Philippines 2013 grand coronation night held at the Grand Ballroom of the Solaire Resort and Casino-Manila.

During the Q&A portion, Megan answered the question, “Why do you want to be Miss World Philippines?”