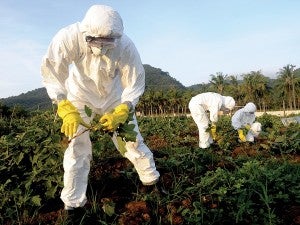 MANILA, Philippines—The Court of Appeals has ruled with finality against the government-sponsored field trials for “Bt talong,” or genetically modified eggplant, in the country.

In a resolution, the court’s 13th Division denied the motions for reconsideration filed by the Department of Environment and Natural Resources (DENR), its Environment Management Bureau (EMB), and several other government and private agencies.

Justices Isaias Dicdican, Myra Garcia and Nina Antonio-Valenzuela said the government failed to raise new substantial grounds to warrant the reversal of the court’s ruling in May banning the experimental planting of genetically modified eggplant.

The court earlier upheld the primordial concern for public health and safety in ruling against the field trials for the modified vegetable, which contains genes from Bacillus thuringiensis that produces natural pesticides.

“It is clear that there is no full scientific certainty yet as to the effects of the Bt talong field trials on the environment and the health of the people… Consequently, the field trials of the Bt talong could not be declared by this court as safe to human health and to our ecology, with full scientific certainty, being an alteration of an otherwise natural state of affairs in our ecology,” the ruling stated.

It opined that even the local and foreign experts presented by proponents of the Bt eggplant agreed that aside from the fact that there were no laws regulating the field testing of genetically modified plants, their safety could not be fully guaranteed.

The Supreme Court issued a writ of kalikasan the following month and referred the case to the Court of Appeals for the determination of the merits of the case.

Aside from the DENR and EMB, the other respondents were the Department of Agriculture, University of the Philippines Los Baños Foundation Inc., UP Mindanao Foundation Inc. and International Service for the Acquisition of Agri-biotech Applications.