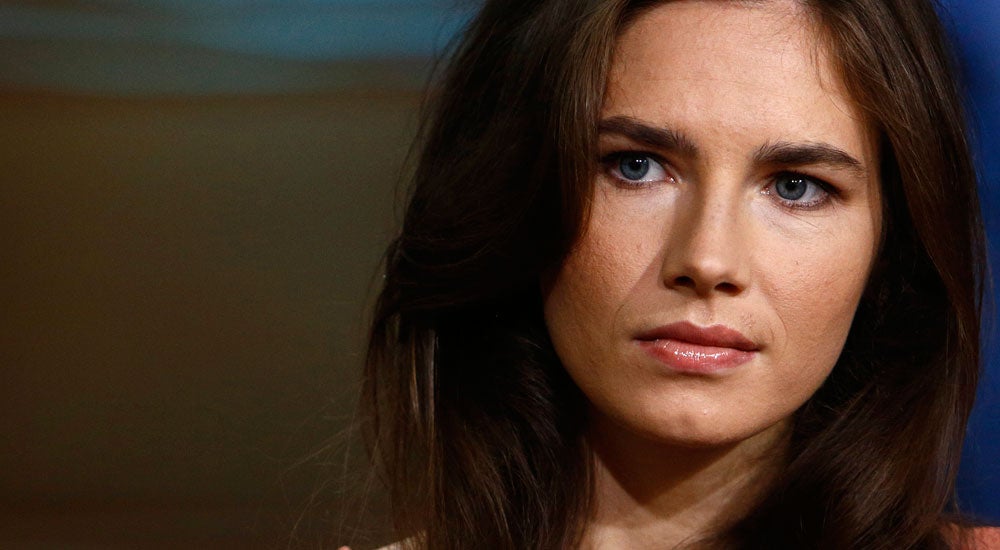 This image released by NBC shows Amanda Knox during an interview on the “Today” show, Friday, Sept. 20, 2013 in New York. Knox defended her decision not to return to Italy for a new appeals trial over the 2007 killing of her British roommate, even as she acknowledged that “everything is at stake,” insisting she is innocent. In March, Italy’s supreme court ordered a new trial for Knox and her former Italian boyfriend. An appeals court in 2011 had acquitted both, overturning convictions by a lower court. Italian law cannot compel Knox to return for the new legal proceeding. AP Photo/NBC, Peter Kramer

ROME – The retrial of Amanda Knox and her former Italian boyfriend for the sexual abuse and murder of a British student in 2007 begins in Florence on Monday, amid fierce questioning of Italy’s justice system.

Knox and Raffaele Sollecito spent four years behind bars for the murder of Meredith Kercher, who was found half-naked in a pool of blood in the house she shared with Knox , her body riddled with stab wounds.

An appeals court overturned their convictions in 2011 and Knox returned to her hometown of Seattle, but Italy’s Supreme Court in March ordered a retrial following an appeal by prosecutors against the ruling.

Supreme court judges cited glaring inconsistencies in the ruling that freed the former lovers in dramatic court scenes in the university town of Perugia as a crowd of locals outside shouted “Shame!” and “Killers!”

A third person, Ivory Coast-born drifter Rudy Guede, who like the other two has always denied the murder, is the only person still in prison for the crime.

Knox, 26, has decided not to return for the retrial, saying her stint in prison aged her by 40 years and she suffers from panic attacks and depression.

“I was wrongly imprisoned for four years and… cannot bring myself to return,” she told one interviewer.

She has said she feels “betrayed” by Italian justice.

“I was manipulated. I am not who they say I am.”

If she is convicted again and if she loses another Supreme Court appeal, experts say there is a remote chance that she could be extradited and imprisoned.

Sollecito, 29, has been living in the Dominican Republic but his family has said he will attend court later on in the trial, which could last months.

Re-trial judge Alessandro Nencini will have to decide whether to order DNA evidence to be examined again from scratch and re-hear testimony from witnesses.

The appeal trial had heard how the original investigation into the murder was flawed— with police caught using dirty gloves to bag evidence and failing to store it properly, opening the way to possible DNA contamination.

The unflattering light shone on Italy’s criminal justice system intensified with the Supreme Court’s blistering attack on the appeal judges for ineptitude.

Key questions dismissed on appeal are now back on the table – with the Supreme Court stressing that Guede could not have acted alone because of the apparent use of two different knives in the attack.

The prosecution’s original theory – that Kercher was forced by Knox and the two men to take part in a drug-fuelled sex game gone wrong- was dismissed at the first appeal, but the Supreme Court wants the retrial court to look at the thesis afresh.

In overturning the acquittals, the court slammed appeal judges for dismissing DNA samples as inadmissable but failing to look at the bigger picture – which it said would place Knox and Sollecito in the house at the time of the murder.

It strongly questioned the decision not to test a third trace of DNA found on the alleged murder weapon – a kitchen knife found in Sollecito’s house – despite experts saying the trace was too low to produce conclusive results.

The court also challenged the decision to dismiss or overlook blood traces and a footprint belonging to an unidentified male, as well as the mystery over an apparently staged break-in, which it said was likely carried out by Guede’s accomplice.