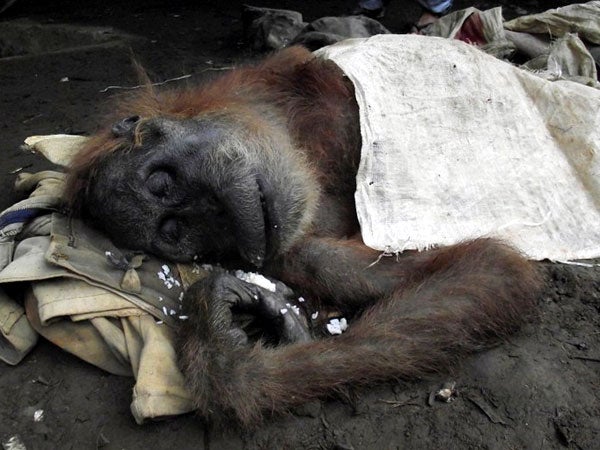 This handout photo taken on June 27, 2013 and released by the Sumatran Orangutan Conservation Programme (SOCP) shows an injured orangutan laying down on the ground as environmental activists transport it to an orangutan shelter in Panton Luas, Indonesia’s Aceh Province . Indonesian villagers have beaten a Sumatran orangutan to death, an animal protection group said on July 2, the latest case of one of the critically-endangered primates being killed by humans. Only around 7,300 Sumatran orangutans remain in the wild, according to protection group the International Union for Conservation of Nature. AFP

SURABAYA — An endangered Borneo orangutan has died at an Indonesian zoo notorious for the death of hundreds of animals in recent years, it was announced Thursday.

The female primate named Nanik was suffering from an intestinal tumor and liver problems, Agus Supangkat, spokesman for the zoo in the central city of Surabaya, told AFP.

The 12-year-old ape, who had lost weight and appeared lethargic in recent weeks, died on Saturday, said Supangkat.

She had been living since 2006 at the zoo, which also houses six other female orangutans and three males.

Surabaya Zoo has been dubbed the “death zoo” because so many animals have died there in recent years due to neglect.

However, Supangkat insisted Nanik had not been mistreated and said zookeepers had fed her fruit, milk and multivitamins.

“We have made efforts to improve the welfare of animals at the zoo, including better food and water,” he said.

Last year a 30-year-old male giraffe died at the zoo. It was found to have 20 kilograms (44 pounds) of plastic in its stomach and to have been suffering from tuberculosis.

Zoo officials believe the plastic came from food wrappers the animal ate after visitors tossed them into its pen over several years.

There are estimated to be 45,000-69,000 Borneo orangutans left in the wild. They are native to the vast island of Borneo, which is shared among Indonesia, Malaysia and Brunei.

Destruction of Indonesia’s lowland rainforest and peatland for palm oil plantations and agriculture has led to a dramatic decline in the number of orangutans, Asia’s only great ape.