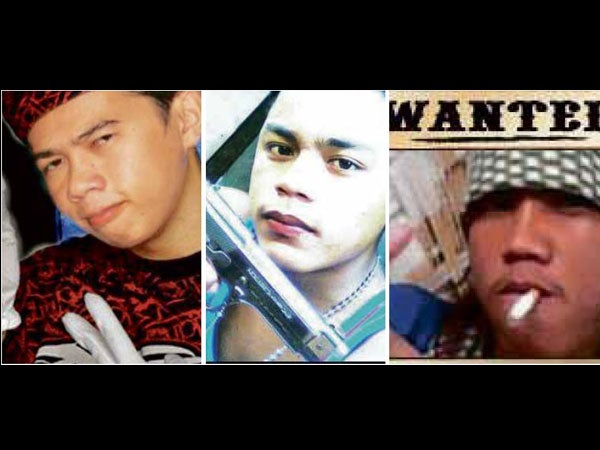 FRIENDS IN TROUBLE From left: Suspects Pepito, Evangelista and Decimo strike “tough-guy’’ poses in their photos posted on Facebook.

In their Facebook accounts, they struck poses or took on monikers that made them look tough. One preened for the camera, a gun in one hand. Another turned his picture into a “Wanted” poster with a cigarette dangling from his lips while a third referred to his pose as the “Original Gangster.”

But with the police now holding them in custody, five of the six suspects in the killing of ad manager Kristelle “Kae” Davantes have dropped the bad boy act, each one trying to downplay his involvement in the high-profile crime.

The latest to come forward was 19-year-old Kelvin Jorek Evangelista who yielded to the Las Piñas police at a bus terminal in Cabanatuan City before dawn yesterday. His surrender came after his father convinced him to drop his plan to go into hiding in Aurora province.

Both face charges of qualified car theft and robbery with homicide in the Department of Justice along with Samuel Decimo, 19, the first suspect to be picked up by the police; Lloyd Enriquez, 18; Reggie Diel, 30; and Baser Minalang, the only suspect who remains at large.

According to investigators, the six are members of an amateur robbery gang from Cavite which operate in the province and the southern part of Metro Manila.

Evangelista, who was presented to reporters Wednesday afternoon, confirmed the information, saying the abduction and killing of Davantes on Sept. 7 was only his fourth operation with the group which he joined less than a month ago.

“We have been friends for a long time and then we thought about staging robberies,” he said.

Evangelista added: “We were just planning to rob someone that night. We didn’t know it would end up with us killing a woman.”

He confirmed the statements Decimo, Diel and Pepito earlier gave to the police that they went to Moonwalk Subdivision in Las Piñas City in a car driven by Pepito because they were searching for a target.

They chanced upon Davantes as she was opening the gate to her family’s house, pushed her back inside her car and took her with them to Cavite province. At least one of them decided that she should be killed because they were afraid that she would be able to identify them.

When asked who made the decision, Evangelista pointed to Decimo. “He told us not to let her go,” he claimed. He said that Decimo even wanted to rape Davantes, an idea opposed by the rest of the group.

According to Evangelista, Decimo and Pepito were in the victim’s car as the group made its way to Silang, Cavite. He said he later saw Decimo strangling Davantes and when they reached a bridge, he saw them take her body out of her vehicle and dump it.

Evangelista also told reporters that it was Decimo’s idea for them to look for a victim to rob that night.

When he was interviewed following his arrest by agents of the National Bureau of Investigation, Decimo admitted that he was the one who stabbed Davantes but on Pepito’s orders.

But this was denied by Evangelista who said that it was Pepito’s first time to join the group. He added that the incident was also the only instance the group used the car Pepito’s employer, Sheila Villa, had entrusted to him.

Evangelista also cleared Enriquez, saying he left the group at Tagaytay before Davantes was killed.

“The validation and comparison of the [suspects’] statements are ongoing,” Chief Sup Christopher Laxa, head of task force Kae Davantes, said. “You can’t prevent them from trying to save their own necks,” he added.