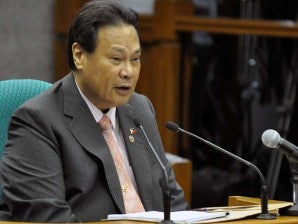 “After the conviction of the former Chief Justice, those who voted to convict Renato Corona were allotted an additional P50 million as provided in a private and confidential letter memorandum of the then chairman of the Senate finance committee,” Estrada said in a privilege speech.

The head of the finance committee then was Senator Franklin Drilon, now the incumbent Senate president.

(Where was the fund sourced? I am sure Secretary Florencio Abad knows the answer to this. And I am very sure that this was not a unilateral decision of Senate President Drilon.)

Estrada,   who was among the 20 senators who voted to convict Corona, did not say whether he accepted the amount.

“I maintain however, Mr. President that I stand by my decision in my vote to convict the former Chief Justice and assure our people that I was never influenced by this incentive which came after the fact,” he pointed out.

Estrada then urged Abad to disclose all “additional”  “rewards” and “bribes” being given to legislators.