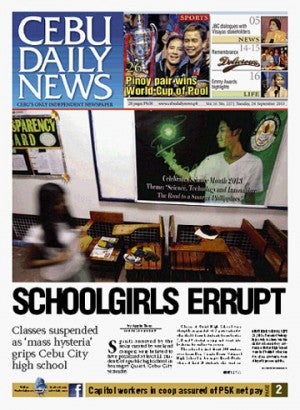 Some girls started crying. Others went into hysterics and their bodies stiffened.

The talk on campus quickly spread that the incident was an offshoot of a camping activity held on campus over the weekend and that the students were possessed by “spirits” who inhabited a big tree that was cut down when the high new school building was constructed.

Rizalina Manloloyo, officer in charge and guidance counselor, said they had to dismiss classes early at 3 p.m. because other students were alarmed.

The 11 affected girls, who came from Grades 7, 8 and 9 were taken to the principal’s office to calm down and wait for their parents to come to bring them home.

Parents of other students rushed to the public high school, bringing religious images of saints, rosaries and holy water.

Episodes of unusual behavior like this should not immediately be taken as cases of demonic possession, Msgr. Achilles Dakay cautioned in an interview.

He said this could be an incident of “mass hysteria”, a phenomenon studied by psychologists in different societies and observed during conditions of fear or stress. (See related story)

Dakay, media liaison officer of the Archiocese of Cebu, said “strange behavior” like this should be reported to the church so Archbishop Jose Palma may form a committee to look into it and determine if it involves “supernatural” forces or can be explained by other means.

The schoolgirls started crying and went into hysterics for no clear reason.

The school is about 300 meters from the Don Vicente Rama National High School in barangay Basak-Pardo where at least 20 students were also involved in a similar situation November last year.

According to Manloloyo, the school’s OIC principal, some of the students could not be restrained as they started screaming and talking in strange voices.

(It spread. After a group of students started going hysterical, students in the next classroom followed suit. Some would suddenly scream then their bodies stiffened while others would start crying. Some started showing threatening behaviour. There were also some who sudenly spoke in a man’s voice.)

Manloloyo, also the school’s guidance counselor, described one of the affected girls – a Grade 7 pupil – as shy. She said it was unimaginable to see her act that way.

Manloloyo directed the teachers to bring the affected students to the Principal’s Office where they tried to calm them down.

She said seven girls were noted to have been acting strangely in the morning.

“We called the parents of the girls. Some of them brought along rosaries and holy water. One mother even brought an image of the Virgin Mary,” Manloloyo said.

Paramedics from the Emergency Response Unit Foundation (Eruf) who were called in made the students breathe in and out of paper bags to calm them down.

Lida Rodriguez, the school’s principal who was on leave, also rushed to the school to assess the situation.

She said they could not disregard the “spirit possession” theory as a big tree in the school’s compound was chopped down to give way to the construction of the school building.

She also said that the school had a weekend camping in the campus and some students were noisy at night.

“We are planning to have the school building blessed this Friday to keep away bad spirits. I’ll also talk to our elementary religion teachers and ask them to teach high school teachers how to handle these cases,” Rodriguez said.

“We can’t disregard the possibility of hyperventilation or perhaps some of them are suffering from asthma because it’s not the first time that this happened,” she said.

One senior student brushed aside the incident.

“I don’t mind. My motto is: ‘to see is to believe’,” said Ana Jane Sinahan, a fourth year night high school student.

Msgr. Dakay told Cebu Daily News that if an “exorcism” is needed, the archbishop will appoint a priest to do it.

“There is no official exorcist in the Cebu archdiocese,” he said, adding that there may be “self-appointed ones”.

In the meantime, he said the clergy would encourage the frightened school girls and their families to remember their Christian faith and “turn to God”. /Apple Ta-as, Correspondent