Reporters and photographers mob Janet Napoles and her security escorts as she is being led out of the courtroom in Makati after her arraignment Monday. VIDEO by INQUIRER.net’s Julliane Love de Jesus

MANILA, Philippine – Janet Napoles-Lim, who is at the center of the P10-billion “pork barrel” scam, on Monday opted not to enter a plea on the case of serious illegal detention filed against her by whistle-blower Benhur Luy.

Napoles made the decision in the arraignment proceedings around 1:30 p.m. before Judge Elmo Alameda of Branch 150 of the Makati Regional Trial Court.

“This means judge will enter for her a plea of not guilty,” said Napoles’ lawyer, Lorna Kapunan.

Kapunan said Napoles cannot enter any plea as they still have a pending petition before the Court of Appeals, which questioned the Department of Justice’s decision that reversed its earlier resolution which said that Napoles didn’t commit serious illegal detention and kidnapping.

Before this, Napoles’ camp filed an urgent motion to move the arraignment in Laguna, citing “security reasons.”

Last Friday, Alameda junked Napoles’ petition, which sought for the postponement of the arraignment due to “lack of merit.”
Kapunan said they wanted to defer Napoles’ arraignment, citing her pending petition for certiorari before the Court of Appeals.

Alameda, however, said the mere pendency of a petition for certiorari at the appellate court will not automatically suspend the proceedings.

Alameda issued an arrest warrant against Napoles and her brother Reynald Lim on August 14 for the illegal detention of her cousin Luy.

Napoles turned herself in to President Benigno Aquino III on August 28, hours after the President announced a P10-million reward for information leading to her arrest. Her brother, however, remained at large.

Napoles was initially detained at the Makati City Jail, and was later transferred to the Fort Santo Domingo in Santa Rosa, Laguna.

From Laguna, Napoles was escorted by members of Philippine National Police’s elite Special Action Force to Makati City which is about 65 kilometers away. 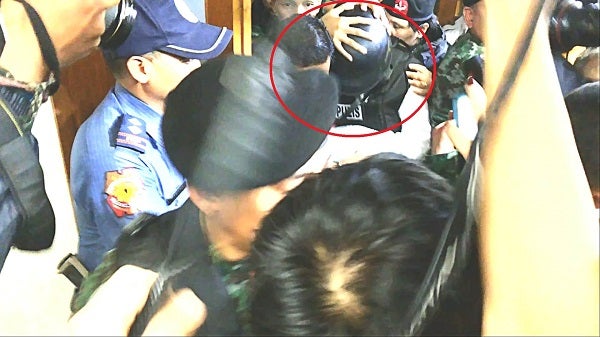 Wearing a Kevlar helmet and police bulletproof vest, Janet Lim-Napoles, in red circle, is being led out of the courtroom in Makati after her arraignment Monday by security escorts. INQUIRER.net’s Julliane Love de Jesus