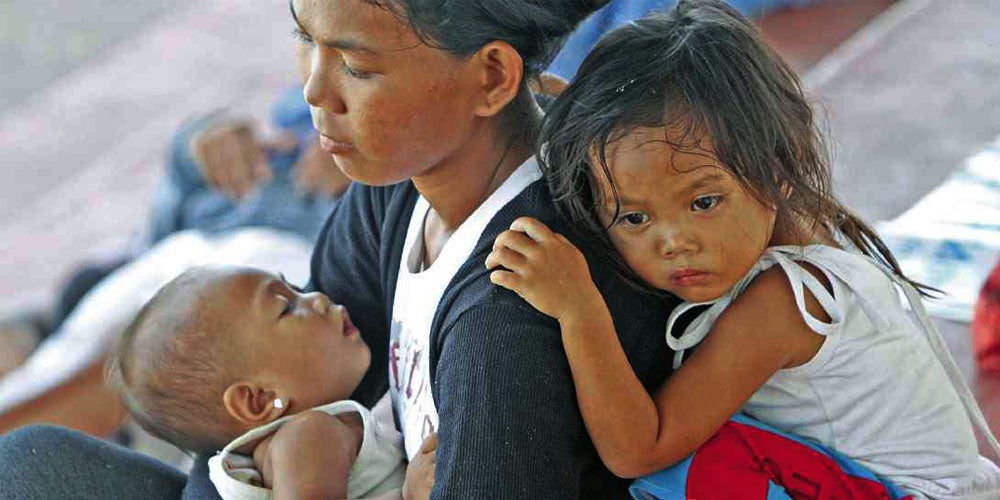 WAITING FOR FOOD. A woman and her two children wait for food to arrive at Joaquin F. Enriquez Memorial Sports Complex, where thousands of people have taken shelter from fighting between government forces and Moro rebels in Zamboanga City. EDWIN BACASMAS

“Our investigators are making sure that Misuari will be made to answer for all this,” Aquino told reporters at Philippine Air Force Edwin Andrew Air Base shortly before boarding a Lear jet to return to Manila.

“We now have witnesses who will directly link him to this conflict and the charges are being prepared by the Department of Justice (DOJ),” Aquino said.

“We have to show that if you cross the line and break the law, we are obligated to go after you and make you accountable to the law,” he said.

More state prosecutors have been sent to the city to interview hostages and gather evidence against Misuari, the President said.

The Philippine National Police has brought rebellion and criminal charges against 29 followers of Misuari who have been arrested or surrendered.

State Prosecutor Aristotle Reyes on Sunday said the first group of Misuari’s followers to face charges included Habier Malik and three other MNLF commanders who were still at large and reportedly still involved in the standoff with government troops.

The charges filed against the rebels included occupying communities and holding residents hostage in violation of a Philippine law that upholds international humanitarian conventions, officials said.

There is “smoking gun” evidence against many of the rebels, Reyes said.

“Many of them were captured during gun battles,” he said.

DAMAGED AREA. Satellite images on Sept. 17 and Aug. 28, which were taken from the website of United Nations Institute for Training and Research, show the extent of damage from fighting in Barangay Santa Catalina in Zamboanga City. The map of the UN Operational Satellite Applications Program was requested by the UN Office for the Coordination of Humanitarian Affairs.

Military spokesman Lt. Col. Ramon Zagala said on Sunday that 102 rebels had been killed, with 117 others arrested in two weeks of fighting.

More than 170 hostages have been freed or able to escape, Zagala said.

Aquino said the government’s firm response would have impressed on Misuari’s followers the high price of mounting similar challenges to state authority in the future.

“It should not happen here anymore but in case it does, our security forces are ready,” he added.

Aquino said consideration for the safety of the hostages was the reason the military operation was taking too long.

“If we were sure that only the enemies were there, we would have used aircraft, heavy weapons and artillery. But we purposely withheld using the heavier stuff and [went] as surgical as possible to ensure the safety of the citizens,” he said.

“Perhaps all this is ending today,” he said.

As the President was speaking to reporters at the air base, military helicopters launched air strikes on rebel positions in Santa Barbara village. Minutes later, fire broke out in the village.

The military said there were just several dozen rebels left, holding at least 20 hostages in one neighborhood of dense clusters of homes.

“We’re now engaged in close-quarter combat; we are going from house to house, room to room,” Zagala said.

In Malacañang, deputy presidential spokesperson Abigail Valte said military choppers were dropping flyers to the holdouts, urging them to surrender.

“Some are responding. We [hope] everyone will respond,” Valte said.

The clashes over two weeks have reduced six villages on the Zamboanga coast to ashes and rubble.

Professor Alih Aiyub, secretary general of the National Ulama Conference, blamed the devastation and humanitarian crisis on the use of violence to resolve the standoff.

Aiyub said the government and the crisis management committee should have worked toward the declaration of a “humanitarian ceasefire” right on the first day of the conflict.

Aiyub said a military solution could be launched at a different time and in a different location.

“They can file charges against these people then later go after them in Jolo. In the mountains, no civilians will be affected,” he said.

He said the ulama (religious leaders) in Zamboanga, Basilan, Sulu and Tawi-Tawi were willing to help mediate between the government and the MNLF to halt the hostilities.

Aiyub said the crisis management committee created a panel for the negotiations, with one of the ulama as a member. But the plan for negotiations changed after the President arrived in Zamboanga City.

Hours after Aquino arrived on Sept. 13, at least seven armored personnel carriers launched an assault on Santa Catalina, sparking heavy fighting and sending residents fleeing to the city center, adding to the more than 62,000 who had fled other villages as the rebels stormed ashore on Sept. 9.

The fighting has displaced 118,819 people, who are jostling for space in Zamboanga City’s main sports complex and more than 50 other evacuation centers in the city.

The sports complex has become a tent city, with more than 45,000 evacuees seeking shelter there.

The bleachers have been converted into beds while the field and courts are being used for pitching tents.

Feeding the thousands has posed problems for the Department of Social Welfare and Development, which has engaged private food providers and volunteers, and appealed to the public for more food aid to deal with the humanitarian crisis.—With reports from TJ Burgonio in Manila; Julie S. Alipala, Inquirer Mindanao; and AFP