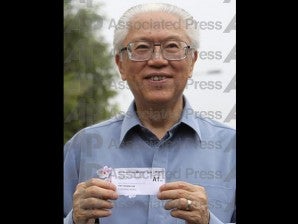 SINGAPORE—Singapore’s scholarly president-elect Tony Tan brings a wealth of experience to the job but will have to deal with restive voters after winning the election by the slimmest of margins.

After a heated campaign, the veteran politician, banker and administrator won by just 7,269 votes out of 2.1 million valid ballots cast in Saturday’s four-way race to become head of state.

The 71-year-old, a former senior minister for the People’s Action Party (PAP), which has ruled Singapore since 1959, took just 35 percent of the total vote and wasted no time in vowing to be a “president for all Singaporeans.”

Though the role is non-political, all of Singapore’s presidents since the city-state became a republic in 1965 have been closely linked to the PAP.

Tan entered parliament with the PAP in 1979 and held numerous ministerial jobs, including education, trade and industry, finance, health and defense. He was deputy prime minister from 1995 to 2003.

He only quit the PAP in June to run for president but rejected allegations that he was just a proxy for the party.

“Remember this is not a political election, not the election of an MP or political party,” he said in final campaign remarks on the eve of the vote.

The presidency was seen as a figurehead job but the vote came just three and a half months after a general election in which the PAP sank to an all-time low of 60 percent of the vote.

With his wide-framed spectacles and slicked-back crown of gray hair, the mild-mannered Tan cuts an academic figure.

He has a degree in physics from the National University of Singapore, a master’s degree from the Massachusetts Institute of Technology and a doctorate from the University of Adelaide.

Tan was the executive director and deputy chairman of the Government of Singapore Investment Corporation (GIC) until July, when he stepped down to run for the presidency.

He also served as chairman of Singapore Press Holdings, one of Asia’s biggest media conglomerates.

“Having worked at Singapore’s sovereign wealth fund, I pressed for greater transparency and accountability,” he said in a campaign video.

“Having led five ministries, I know how essential the integrity of our public service is.”

Tan was heckled by opposition supporters when all four candidates were formally presented to the public on August 17, and has been the target of strident attacks from online critics demanding an independent president who can serve as a check on the government.

The Singapore president was handpicked by parliament until direct elections were introduced in 1993.

The president’s responsibilities include vetting top government appointments and safeguarding the city-state’s foreign reserves, which stand at around $250 billion.