Kin to agents: What you did was awesome
By: Nancy C. Carvajal - @inquirerdotnet
Philippine Daily Inquirer / 11:51 PM September 21, 2013 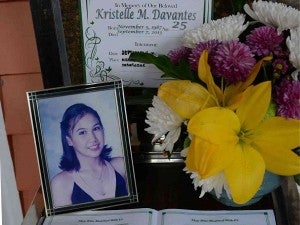 Kristelle “Kae” Davantes was opening the gate of her Las Piñas City home when she was held at gunpoint by three men, who had two more cohorts waiting in a car nearby.

They forced her back into her own car, pinned her down on the back seat and commandeered her Toyota Altis to get out of Moonwalk Village, with the two gang members in the other car following them.

They drove all the way to Tagaytay City, where Davantes was stabbed with a knife bought for only P20 and strangled using the power cable of her own laptop computer, according to a suspect arrested on Friday by the National Bureau of Investigation (NBI).

Samuel Lloren Decimo, 19, of Molino, Bacoor City, Cavite province, admitted stabbing the 25-year-old advertising manager in the neck several times, saying he was ordered to do so by the four other suspects, who remained at large. He also helped dump the victim’s body under a bridge in Silang, Cavite province.

With this “confession” made in front of reporters and in the presence of NBI officials, the Sept. 7 murder which no less than President Benigno Aquino III had ordered solved appears headed for an early closure—unlike many other high-profile crimes.

Prayers before a coffin

“Kae heard us and helped us find the suspects,” said NBI agent Edwin Cawala, who recalled how his team prayed before her coffin during the wake, asking her “to help us find her killers.”

“We followed a trail and the effort paid off. We started to work from there,” added Special Investigator Joseph Salac.

Davantes’ uncle Vince Davantes went to the NBI headquarters on Saturday to personally convey the family’s gratitude. “Thank you so much, NBI,” he said in a letter addressed to Virgilio Mendez, Deputy Director for Regional Services.

“Our family could not help but praise God. Thank you,  sir, for all that you did,” he said. 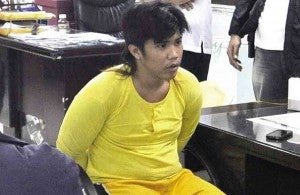 A source from the NBI told the Inquirer that the family earlier declined offers from the NBI team to help in the investigation because the Davanteses had already talked to the police. Mendez declined to confirm this, saying it was “irrelevant.”

“It’s our mandate to investigate crimes and our objective is one with the police to arrest the perpetrators,” he said, stressing that his team would coordinate with the police in pursuing the other suspects.

With the information provided by Decimo, the NBI also recovered Davantes’ iPhone and laptop from a thrift shop in Alabang, Muntinlupa City, where the suspects had sold the items.

The laptop was already “reformatted” when found, but Davantes’ siblings confirmed that the items were those of their sister.

Decimo said his group—a band of jobless men in their teens and 20s—was only out to stage a robbery that night, with no intention to kill. “Just a holdup, that’s all. We were really broke.”

But things didn’t go as planned when they pounced on Davantes.

“We quickly gagged her mouth that’s why she wasn’t able to scream,” said Decimo of their “random victim.” Asked why they picked Davantes to be their prey, he said “we were merely going around looking for a target that night. And then we just saw her alone getting out of her car to open the gate.”

“We had never killed a victim before, but we decided to kill her because she saw our faces and the plate number of the car we used,” Decimo said. “We also agreed not to touch (sexually abuse) her.”

“I actually hurt myself while stabbing her,” he said, adding that the blood found in Davantes’ car may also be his. He was given that murderous task by his partners because he “had not done anything for the group that night.”

He said they were able to get P3,000 in cash from the victim’s wallet, which they divided among themselves.

According to Decimo, they were able to go around the subdivision in the wee hours of Sept. 7 because the car they used had a sticker that allows it to enter the village without being stopped by the security guards.

Mendez said the car used by the suspects to enter Moonwalk—a Toyota Vios (NYU-517)—was probably also a stolen vehicle. It was driven by another suspect identified only as “Jomar,” who reportedly had a girlfriend in another Las Piñas village where Davantes’ Toyota Altis was found a week after the killing.

The Altis was emitting smoke, with its dashboard damaged by a small fire, when found. Decimo confirmed that they tried to set it on fire to cover their tracks and also because they thought nobody would buy a stolen vehicle widely reported in the media.

Decimo was arrested by agents of the NBI’s National Capital Region Division headed by Regional Director Elfen Meneses. The bureau said he was armed with a knife, similar to the one found near Davantes’ body, when captured at his Molino residence.

The NBI said he and his group had also robbed a passenger jeepney on Magdiwang Street in Molino prior to the arrest. Decimo said they got P200 from that robbery. A wig he used for disguise in the jeepney robbery was also found in his possession.

Mendez said the NBI had informants who tagged Decimo and his group in the Davantes murder, but withheld details so as not to jeopardize the manhunt for the other suspects.

“Based on the confession, it was a robbery case and a senseless death,” the official said.

De Guzman said the group appeared to be “amateurs who panicked,” that’s why they killed Davantes.

Read Next
Just a fall guy? Davantes family keeps the faith
EDITORS' PICK
Smart powers Liga Adarna Season 4: Race to the Top
Miss Universe Philippines partners with JC
‘Reporter/commentator’ mauled for stealing fighting cocks
Who is Julian Ongpin?
Duterte orders review of conduct of war on drugs
No evidence to warrant filing of homicide case vs Julian Ongpin – police
MOST READ
Gordon: Senate uncovered ‘mother of all corruption’ under Duterte admin
LOOK: Angel Locsin inspires with weight loss progress
Isko Moreno reaches out to other presidential bets for unity
Who is Julian Ongpin?
Don't miss out on the latest news and information.