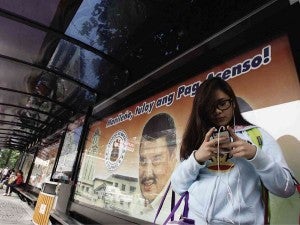 BROWSER/COMMUTER A woman with a smartphone tries out the connection at the first Wi-Fi-ready bus stop inaugurated in Manila on Friday. NIÑO JESUS ORBETA

That’s what the city government of Manila is calling the free wireless Internet service that commuters can enjoy at select waiting sheds, a project launched by Mayor Joseph “Erap” Estrada and Vice Mayor Francisco “Isko Moreno” Domagoso on Friday.

The two officials inaugurated the first of the Wi-Fi-ready sheds near a footbridge on España Boulevard, in front of the University of Santo Tomas. It is one of the bus stops designated by the local government under a scheme regulating the entry of buses in the city.

Wi-Fi services will also be made available at bus stops in the Park ‘N Ride Lawton Terminal, Rizal Park and on Quirino Avenue.

“We did not build a Wi-Fi hotspot with a shed. We put up waiting sheds in bus stops with an add-on Internet connection,” Domagoso said. “The project will benefit the people at no cost to the city.”

The waiting sheds were built under a private-public sector partnership (PPP) with Sun Spring Corp., the vice mayor said. The company can enter into advertising contracts for the back-lit panels that, for now, bear the pictures of Estrada and Domagoso.

The city government expects to get a 20-percent share of the ad revenues, according to Domagoso. The Wi-Fi operation and the cost of the sheds’ maintenance will all be shouldered by Sun Spring.

Smaller waiting sheds with a similar design would soon be built for jeepney stops, he added

For security, Senior Supt. Gilbert Cruz, chief of the Manila Police District directorial staff, said collapsible police outposts were put up in the area. The waiting sheds will also be monitored through surveillance cameras linked to a command center to be set up on the fourth floor of City Hall.

Told about comments in the social media that he should instead prioritize the city’s flooding problem, Estrada stressed that the private sector was paying for the cost of the Wi-Fi project.

The former President also said he would go to Japan Thursday next week for a five-day visit, during which he would meet with officials of the Japan International Cooperation Agency (JICA) to discuss new flood-control measures for Manila.