British drivers can pay for parking with chestnuts 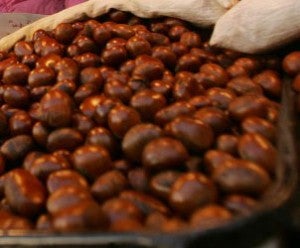 A company that runs parking lots in the English cities of Leeds and Manchester is temporarily letting drivers pay with the dark brown seeds that fall from horse chestnut trees each autumn.

Town Center Car Parks is accepting horse chestnuts for parking time at a rate of 20 pence (32 cents) apiece. So far it has collected about 1,500 of the nuts, known as conkers after the traditional schoolyard game in which children try to smash them.

The weeklong “Bonkers for Conkers” campaign was due to end Sunday, but company spokesman Matthew Williamson said Thursday it may be extended.

The chestnuts are only being accepted at staffed parking lots, not automated ticket machines.

“You can’t put conkers into coin slots,” he noted.

It hasn’t decided yet what to do with the conkers.