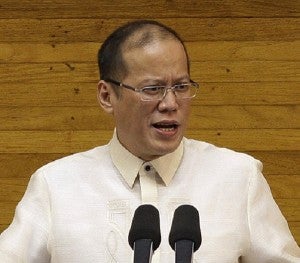 MANILA, Philippines—The Aquino administration’s public satisfaction rating rose to a new high in June, with double-digit gains in most socioeconomic classes and geographical areas, as well as better scores in performance on specific issues, according to the latest Social Weather Stations (SWS) survey.

The results of the survey, which were first published in BusinessWorld, showed 75 percent of respondents to be satisfied, 9 percent dissatisfied and 16 percent ambivalent, resulting in a net score of “very good” +66 (satisfied minus dissatisfied).

The latest net score was a 13-point jump from the March figure of +53 (68 percent satisfied minus 15 percent dissatisfied), which the SWS also rated as “very good.”

The June rating also beat the previous high of +64 (“very good”) scored in September and November 2010.

The survey was conducted from June 28 to 30, before the Inquirer published its series of reports on the P10-billion pork barrel scam, which main suspect Janet Lim-Napoles allegedly carried out over the past 10 years with the alleged collaboration of certain senators and congressmen using a network of bogus nongovernment organizations.

The pork scam series started on July 12, setting off a wave of outraged public reaction that culminated in an indignation rally calling for the abolition of the pork barrel on Aug. 26 at Rizal Park. The gathering was considered the first and largest protest assembly since President Aquino was elected in 2010.

The survey was also taken before fighting broke out between government forces and Muslim rebels in Zamboanga City early this month. Several hundred members of a faction of the Moro National Liberation Front (MNLF), the main Muslim insurgency headed by MNLF founder Nur Misuari, entered the city on Sept. 9 to stage an “independence” march and rally.

Compared with its predecessors, public satisfaction ratings with the Aquino administration have been substantially higher. The previous highest rating by any administration was a “good” +36 notched in November 1998 during the short-lived term of deposed president and convicted plunderer Joseph Estrada, the SWS said.

The survey used face-to-face interviews with 1,200 adults nationwide. It had a margin of error of plus or minus 3 percentage points.

The government’s net satisfaction scores improved across all geographical areas, except in Mindanao where its rating stayed at a “very good” +63. Net satisfaction ratings in the Visayas soared from a “good” +45 in the previous quarter to an “excellent” +76, while “very good” scores were seen in Metro Manila (from +43 to +53) and Luzon areas outside Metro Manila (from +54 to +68).

The respondents were also asked if they were satisfied with the administration’s performance on 14 specific issues, against 16 in the previous survey.

Of the issues tested in June, the government scored “very good” on two, “good” on six, and “moderate” on six.

The government got a “very good” score of +58  in providing basic elementary and high school education, a new issue included in the survey, and +57 in helping the poor, up by a point from March.—Inquirer Research