DINALUPIHAN, Bataan—Farmers and village officials here said the liquid fertilizers and plastic sprayers delivered to them by a nongovernment organization (NGO) identified with alleged pork scam queen Janet Lim-Napoles and bought with public funds credited as pork barrel of three senators were unusable, calling the project “a waste of money.”

Fernando Paule Jr., a farmer and village chief of Sta. Isabel here, said the liquid fertilizers were “so [low grade] that farmers were not able to use them.”

Paule said farmers, who used the fertilizer, had told him that it had no impact on the quality and growth of their crops. “It’s just a waste of money,” he said.

He said they compared prices from different agricultural supply stores and found that the items given to them were worth only P1,000 each, although documents showed that these cost the government from P20,000 to P35,000 each or more expensive by P19,000 to P34,000 each.

Rolando Romano, village chair of Pita, said while the liquid fertilizers were useless, they were able to use some of the plastic sprayers. “But some of them were also defective,” he said. 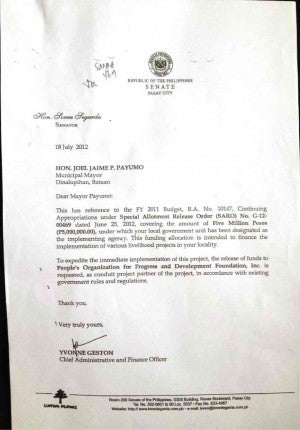 He said he heard this same complaint from more than 200 farmers in Dinalupihan who received the items in 2012.

Former Mayor Joel Payumo acknowledged that Dinalupihan received funds from an NGO linked to Napoles but he said the local government was not part of the scam.

“We were just the end user, and there were deliveries made to us,” Payumo said.

He said the People’s Organization for Progress and Development Foundation Inc. (POPDFI), headed by whistle-blower Merlina Suñas, delivered to the town “organic agrarian implement packages” each worth P36,450, “high-value yield enhancement packages” each costing P20,500, and farm inputs and implements worth P20,500 per package.

The Commission on Audit  (COA) said a review of the fund transferred to POPDFI, amounting to P38 million from the Priority Development Assistance Fund (PDAF) of Senators Juan Ponce Enrile, Loren Legarda and Jinggoy Estrada, showed that the Dinalupihan government had “failed to submit the necessary supporting documents needed upon the release, implementation and liquidation of funds as required by the COA.”

But Payumo said: “How can that be? The COA was there during the distribution, and they inspected it before it was given to the beneficiaries. We have all the necessary documents to account for everything.”

Asked how he was able to get funds through the senators, Payumo said representatives from POPDFI went to Dinalupihan and informed the local government it had a Special Allotment Release Order (Saro) from a senator intended for the town. Saro is a document from the Department of Budget and Management signifying the availability of funds for a project.

“We have been writing senators and implementing agencies for [funds and projects] in Dinalupihan, just like any other local government would do. When they come, and tell you that, of course, you don’t ask if they are bogus or not. You don’t question it,” he said.

He said he agreed with Luy and Suñas that although the check representing funds for the project would be sent to Dinalupihan, “they would be the ones to implement the project.”

“This was stated in the letters to us by the senators themselves,” said Payumo.

“If your local government was given these funds, you don’t question why they should be the ones to implement and not us. We don’t bother with that. We are just grateful,” he said.

According to Payumo, 70 percent of Dinalupihan is composed of farmland. It is the only inland town in Bataan, “so farm inputs benefit our community.”

He said it was Legarda, Estrada and Enrile who designated POPDFI as the project implementer.

In a letter on July 18, 2012, Yvonne Geston, chief administrative and finance officer of Legarda’s office, endorsed POPDFI to Payumo as a “conduit project partner,” in order to “expedite the immediate implementation of this project.”

In a letter on April 19, 2012, lawyer Jessica “Gigi” Reyes, then Enrile’s chief of staff, also endorsed POPDFI. She also informed Payumo that Jose Evangelista II, deputy chief of staff, had 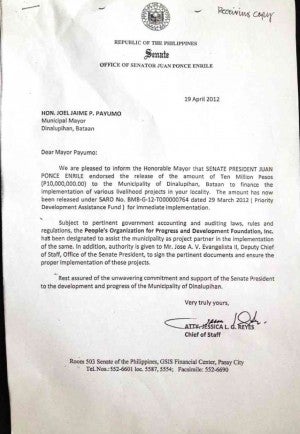 been authorized “to sign the pertinent documents and ensure the proper implementation of these projects.”

Payumo said these were not ghost projects.

“They delivered … I got beneficiaries from the different villages in Dinalupihan. Before they would make deliveries, I would ask them how many people would be the beneficiaries, and then tell the village chairmen here. Proxies were not allowed, so those who signed the receiving forms were the actual farmers who used them,” he said.

Payumo also referred to another network of NGOs, which allegedly benefited from pork barrel allocations.

Operated allegedly by a local family, one of whom ran and lost for mayor, this other network of NGOs did not have direct dealings with the Dinalupihan government, he said.

“If you check the records of Dinalupihan, you won’t see any projects of [the other NGO network] that went through our office. We were surprised and we didn’t know that they operated NGOs,” he said.

According to the COA special audit report, these three NGOs were part of the 26 NGOs that were granted access to PDAF facilitated by the National Agribusiness Corp. (Nabcor) from 2007 to 2011.

Nabcor officials have been implicated in the plunder charges filed by the Department of Justice in the Office of the Ombudsman on Monday.