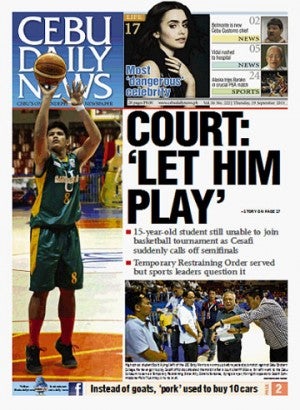 A judge yesterday ordered sports organizers to let a 15-year-old student play in Cebu’s annual inter-school basketball tournament while the court hears a petition challenging a decision to bar the youth over eligibility issues.

But student Scott Aying of the University of San Carlos ended up in the sidelines waiting again, when officials of the Cebu Athletic Foundation Inc. (Cesafi) suddenly called off yesterday’s semifinal round of the juniors division at the Cebu Coliseum.

At 7:30 p.m., two hours after a court sheriff served the 20-day Temporary Restraining Order (TRO) at the coliseum, Cesafi Commissioner Felix Tiukinhoy Jr. announced that the scheduled games would be postponed to Friday.

Amid objections by USC, lawyer Baldomero Estenzo, the counsel of Cesafi, said the court order appeared “irregular” and that they needed to clarify it with the judge.

“On its face, it appears to be irregular. The date of the order was Sept. 16. But on that day, we know that the case wasn’t handled yet by Judge (Simeon) Dumdum,” Estenzo told Cebu Daily News.

Judge Dumdum of the Regional Trial Court Branch 7 issued the 20-day TRO mandating Cesafi and its representatives “to allow Scott Aying to play beginning today in the games of the 13th Cesafi Season.”

The judge said there was a need to “maintain the status quo” until merits of the case are heard.

He set the hearing on Sept. 26 for Cesafi to show cause why the court should not grant the prayer of Aying’s parents to issue a writ of preliminary injunction.

The petition filed last week by Aying’s parents focuses on a two-year residency rule for players in the basketball league, and the allegation that it was unfairly misapplied in the case of Scott, who was one of Don Bosco Technological Center’s “best basketball players” until he transferred to San Beda College in Manila, then returned to Cebu and joined USC and its Baby Warriors team.

The TRO was served by a court sheriff to the Cesafi board and Commissioner Tiukinhoy at about 5 p.m. in time for the scheduled game between the USC Baby Warriors and the Cebu Eastern College Dragons at the Cebu Coliseum.

Although the court’s order to “allow Scott Aying to play” was clear, Cesafi officials said the interpretation of what is the “status quo” to be maintained was not.

Cesafi officials said the “status quo” would mean the situation where Aying was not allowed to play, but Aying’s lawyer said this was not the legal definition of status quo, which refers to the last peaceful, uncontested standing of the parties before the controversy broke.

“Aying was first allowed to play and later on disqualified, said Gonzales,“hence, the controversy started when Aying was maliciously disqualified without due process. But, how do you expect them to understand the simple language of a TRO when they themselves don’t know how to interpret their own rules. This is a flagrant display of arrogance and disrespect to the Court. More so, continuing child abuse,” he added.

The student’s lawyer said he was happy with the court order but said “This is not a victory because the damage has been done.”

“But we are grateful to the honorable court in granting the TRO, for suturing the wound that has blighted the petitioner’s son’s well-being,” said Gonzales in a text message to CDN.

He said Cesafi could “have been more circumspect and mindful of its actions” in dealing with minors in the league.

“Children are the most vulnerable citizens in our society,” Gonzales said.

Meanwhile, Estenzo of Cesafi said they were in a quandary as to what the court order really meant.

“There’s a part of the order that says a status quo shall be observed. That would mean the player wouldn’t be allowed to play since he really has been prohibited from joining the tournament,” Estenzo explained.

Estenzo, who is also dean of the University of Cebu’s College of Law, said he will seek clarification from the judge.

“For now, we decided to postpone the game involving the team of Aying until we get a clarification from the court.”

Scott was one of 15 players of USC given the go signal to play for the school in the 13th Cesafi Season.

Last August 2 or the day before the tournament’s opening, USC received a letter from the Cesafi Screening Committee, stating that Scott was disqualified to play.

It cited Cesafi rules that “any high school student of a Cesafi member school who transfers to another member school shall be required a minimum of two-year residence to qualify to play.”

Aying’s parents insist that the rule does not apply since San Beda in Manila is not a Cesafi member.

Aying’s parents have called the Cesafi’s treatment of their son a case of child abuse and are suing for P50,00 in moral damages.

They asked the court to stop Cesafi officials from barring Scott from playing in the tournament. /Ador Vincent Mayol, Reporter with a report by Jonas Rey Panerio