Up to 15 MNLF gunmen yield as troops near ‘ground zero’ 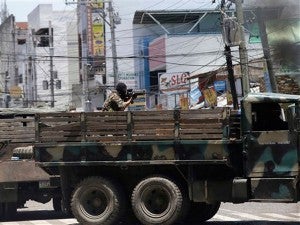 Lieutenant General Rey Ardo, commander of the Western Mindanao Command, said the gunmen yielded as government troops closed in on their positions in the so-called “ground zero,” where clearing operations were ongoing.

Ardo credited the leaflet campaign by the military for the surrender of the gunmen, who are still being “extricated” from the area.

He said the rebels could have surrendered because they were tired, hungry and running low on ammunition.

On Wednesday, the military said there could be less than a hundred hostages taken by MNLF forces and used as human shields.

At least a hundred have been killed and injured from the gunbattle that started last week. Civilians bore the brunt of the fighting, with at least 110,000 persons displaced as of Wednesday afternoon, seven killed and 67 injured.