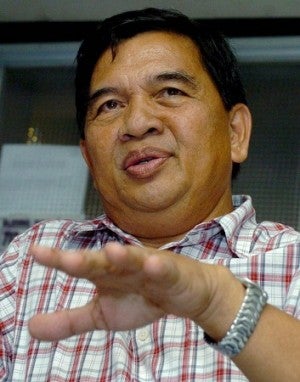 MANILA, Philippines – Moro National Liberation Front (MNLF) commanders under former Cotabato City Mayor Muslimin Sema met on Tuesday to affirm their support for the 1996 peace agreement and denounced the fighting in Zamboanga City that has stretched to its second week.

Sema chaired the meeting attended by 53 MNLF ground commanders and their acting chief of staff from Central Mindanao, Lanao, Zamboanga del Sur, and Sibugay that took place on Tuesday at Camp Ibrahim in Datu Odin Sinsuat in Maguindanao.

The meeting called on “all its followers to stand down and enjoin other MNLF groups to follow the path of peace based on the 1996 Final Peace Agreement,” Sema told the Philippine Daily Inquirer by phone late Tuesday afternoon.

According to Sema, his faction of the MNLF has several hundreds of fighting forces.

Sema’s group also called on the Peace Committee for Southern Philippines (PCSP) of the Organization of Islamic Cooperation (OIC) “to convene as soon as possible the tripartite meeting and discuss the implementation of the 1996 Peace Agreement.”

The government hastily called off the tripartite review of the 1996 Peace Agreement, which was supposed to take place this week in Yogyakarta, Indonesia, after MNLF founding chairman Nur Misuari said he could not attend this round of talks.

Misuari’s loyal fighters launched an attack in Zamboanga City on September 9 reportedly in an attempt to hoist the MNLF flag at the city hall.

At Camp Aguinaldo, military spokesperson, Brig. Gen. Domingo Tutaan, said the conflict has stretched longer than what the public expected because of the urban terrain that security forces had to deal with.

The commanders have been following a “calibrated response” because the MNLF has been holding human shields, Tutaan said in a press conference.

The Armed Forces said over a hundred people have been killed in the two-week-old conflict.

Ninety three MNLF rebels have surrendered, including the 23 fighters who gave themselves up to Zamboanga police chief, Senior Supt. Jose Chiquito Malayo, who was reported to have been abducted last Tuesday.

Tutaan said 166 hostages have been released or rescued.

Less than a hundred remained in captivity and were being used as human shields by the MNLF, as of Wednesday, Tutaan said.

“As we are continuing our efforts in several areas (where) the armed group are still holed up, the other areas already in government control are now being cleared,” Tutaan said.

The villages of Sta. Barbara and Sta. Catalina remain the focus of operations by the security forces.

Asked if MNLF commander Habier Malik has been holed up in one of these two villages, Tutaan said: “Without sacrificing operational matters, yes.”

Tutaan noted that these have been the areas where the armed group has continued to open fire.

Asked if Misuari was the only one who could end the hostilities by ordering Malik to stand down, MNLF chief Sema said: “I think so since Malik is serving as one of his military commanders. Malik does not listen to anyone else.”