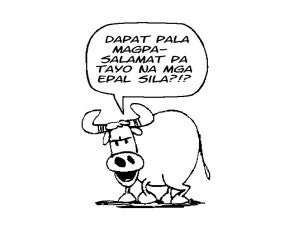 Don’t rush to judgment when you see a billboard from an “epal” (one who loves to take credit, publicity) rising on your street.

The appeal came from no less than Speaker Feliciano Belmonte Jr. who apparently believes it’s actually a good thing for politicians to put up street signs identifying public projects they have funded.

What Belmonte considers an epal, or being an epal, is putting one’s name on a project or projects where he has no involvement at all.

“Epal or not, it’s better for people to know where you put your money,” Belmonte told reporters on Tuesday, using a slang that describes credit-grabbers or people desperate for attention.

A Filipino slang, the word “epal” has also been described as referring to someone who unnecessarily butts into a conversation.

With the congressional pork barrel under a cloud of suspicion, it’s actually a good thing for lawmakers to put up signs identifying the projects they have funded, according to Belmonte.

He said it would be better for people to know where the lawmakers had channeled the public funds that had been placed at their disposal. That would also help citizens become more informed.

“I mean, right now everybody talks about anti-epal. But there’s also a necessity to inform the people, the constituents, where their money goes,” he said.

Still, he said there should be limits on the number or size of signs lawmakers can put up. A small sign saying where the project comes from would suffice, he said.

Belmonte made the statements while explaining how lawmakers may still identify infrastructure projects for their respective districts now that the P25-billion lump sum allocation for their pork barrel—or Priority Development Assistance Fund (PDAF)—has been removed from the budget.

The PDAF has been rechanneled to six departments, including the Department of Public Works and Highways (DPWH).

Lawmakers can still propose projects but would have to identify these early and include these in the DPWH budget as a line item.

Gone is the practice whereby lawmakers could choose to fund road and building constructions anytime they wanted.

This new process is touted to be more transparent since every project would be included in the budget and could be scrutinized.

“I think the days of yore when you have a road leading to your own farm are gone,” Belmonte said.

The House of Representatives has decided to scrap the PDAF following disclosures about a scheme where lawmakers and their cohorts supposedly pocketed these funds by channeling them to fake nongovernment organizations.

The controversy has ignited public outrage against lawmakers and sparked calls for an end to the discretionary funds, which critics said were used for political patronage.

An “anti-epal” crusade has also started among citizens tired of seeing the names and faces of politicians plastered on buildings, vehicles and banners, especially in the days leading up to the midterm elections in May.