Palace hits back at Tatad: Weaver of tall tales 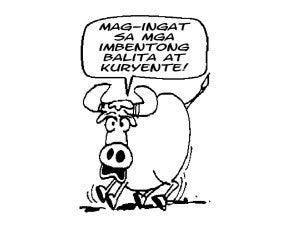 Even in his twilight years, the late dictator Ferdinand Marcos’ former information minister, Francisco Tatad, has not lost his touch for weaving tall tales—so says Malacañang.

Marcos’ former martial law mouthpiece claimed in his newspaper column that detained businesswoman Janet Lim-Napoles spent six hours in a “closed-door session” inside Malacañang with President Aquino, Interior Secretary Manuel Roxas II and other Cabinet officials on Aug. 28, the day she surrendered after two weeks of being on the lam.

Presidential spokesman Edwin Lacierda on Monday was quick to brand Tatad’s assertion as “pure fiction,” an “obvious fabrication” and a “tall tale,” while taking a swipe at the 73-year-old Tatad’s role as chief propagandist of Marcos.

“This grandiose conspiracy theory peddled by Tatad is symptomatic of the old order that has been swept away. He represents what is wrong with our politics, and over the last decade, the Filipino people have made that abundantly clear by denying his return to public office twice,” Lacierda said, referring to Tatad’s failed bid to return to the Senate in 2004 and 2010.

Tatad did not identify his informants for what he termed as a “grand deception” although described them as “highly authoritative sources whose loyalty to Aquino is exceeded only by their loyalty to the truth and who shared the story with extreme pain and sadness.”

In his column, Tatad wrote: “According to these sources, Napoles arrived at 10:30 a.m., all by herself, without her lawyer, but accompanied by Lacierda alone, who happens to be a lawyer. She was immediately conducted to what is known as the ‘Music Room’ or ‘Ready Room’ where she remained closeted with Aquino, Roxas and the Malacañang spokesperson for the next six hours.”

“At lunch time,” Tatad went on, “food was brought in by a secretary rather than the regular Malacañang waiters, and Cabinet Secretary Rene Almendras joined the meeting. He was followed by Budget Secretary Florencio Abad at around 1 p.m., and Ochoa a few minutes later. Between 2 p.m. and 3:30 p.m., Aquino stepped out three times to meet some official callers, then finally left for an unknown destination. At 4:30 p.m., the meeting ended, and Lacierda left with Napoles, destination unknown.”

‘Not accustomed to truth’

“This administration believes in truthful and transparent reportage, which the former Marcos-appointee may not be accustomed to,” Lacierda said.

The President’s day began at 10 a.m. at the Sofitel Philippine Plaza Manila for the 8th East Asia Conference on Competition Law and Policy.

“The President was at two high-profile events at 10 a.m. and 1:30 p.m. with hundreds of attendees. At both events the President also delivered speeches, the videos of which are now collectively embedded on the President’s Day page for Aug. 28, 2013,” said Lacierda.

Recounting Abad’s activities, Lacierda said he “was at his office from 12:15 p.m. until having to leave for a 3 p.m. meeting in Quezon City and from 6 to 7 p.m. was at the Department of the Interior and Local Government to meet with some organizers and attendees of the One Million People March.”

Lacierda served as the Palace intermediary in the surrender of Napoles on Aug. 28—he fetched Napoles at Heritage Park at 8:06 p.m. and brought her to the Palace at 9:37 p.m. to meet the President, according to the Palace account.