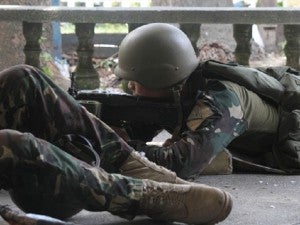 State security forces continue to push in Barangay (village) Santa Barbara in an effort to finally flush out the MNLF fighters.

A huge column of smoke was also seen billowing out from a fire which started at around 8 p.m. on Sunday.

A report from the Armed Forces of the Philippines said that as of 7 p.m. Sunday, 62 were killed from the gunbattle that started last Monday, 51 MNLF rebels. There were 48 rebels captured.

At least 60,000 were displaced from the fighting, and were housed in shelters in the city. The city has a population of close to a million.

Dozens were allegedly being held hostages.

The ongoing crisis shut down seaports and airports, closed banks and businesses.

At least five fire incidents that burned hundreds of homes were also recorded since the start of the conflict.

The MNLF rebels started their attack last Monday, as they tried to raise their flag in city hall.

It was believed to be led by the faction of MNLF founding chairman Nur Misuari, who disagrees with the new peace deal the government is working on.

No end in sight for Zamboanga conflict