5 killed in slides in Pangasinan, Baguio as Typhoon ‘Mina’ passes An old tree that has stood guard over this road behind the Baguio Cathedral was toppled by strong rain and wind unleashed by typhoon Mina on Saturday. As it fell, the tree tore up neighboring electric posts. EV ESPIRITU/INQUIRER

Mina pounded northern Luzon as it moved toward Taiwan, unleashing strong winds that toppled trees and electric posts, cutting off electricity in Isabela, Ilocos Norte and Baguio City. Low-lying towns and riverside villages in Isabela, Cagayan, Ilocos Norte and Pangasinan were flooded as waterways swelled due to continuous rains.

In Pangasinan, the siblings Reajen Bautista, 6, and John Rey, 5, died when a landslide crushed their hut at the foot of a hill in Barangay Rabon in San Fabian early Saturday, police said.

He said the landslide occurred at the height of heavy rains at 1 a.m. The victims’ bodies were dug up at around 3 a.m.

In Baguio City, strong rains on Saturday noon triggered a slide that toppled a section of the city dump in Barangay Irisan, killing at least three people and burying three houses near the facility, the Office of Civil Defense in the Cordillera said.

OCD reports said the regional Department of Health confirmed three fatalities who had yet to be identified. 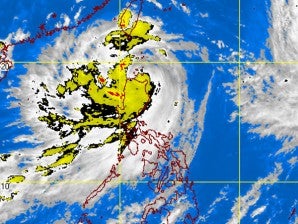 Rescue workers, the OCD said, managed to save an undetermined number of people belonging to eight families, whose houses were swamped by garbage that cascaded down from the dump.

In Pangasinan, Avenix Arenas, spokesperson of the provincial disaster risk reduction and management council, said her office had warned residents living along rivers, coastlines and hills about the possibility of landslides and flooding due to the strong rains.

Despite the heavy rains, she said, the San Roque Dam in San Manuel town did not release  any excess water because it was still about 30.44 meters away from the spilling level of 280 meters above sea level.

Reports from the disaster council said an early morning whirlwind destroyed seven houses and damaged 12 others in Barangay 18 in Sarrat town. No resident, however, was reported  hurt.

Personnel of the Laoag City engineering office conducted clearing operations at 10 a.m. in Barangay Cataban after another whirlwind uprooted trees and blocked a road in the village. 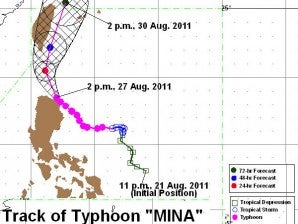 Saturday flights of Cebu Pacific from Manila to Laoag and vice versa were canceled due to bad weather.

The Philippine Atmospheric, Geophysical and Astronomical Services Administration had placed Ilocos Norte under typhoon signal No. 2 in its 11 a.m. weather bulletin.

William Marders, INEC information officer, warned residents to stay away from broken power lines and wait for INEC personnel to fix them.

In the Cordillera, a huge tree in front of the Baguio Cathedral fell due to strong winds, dragging down several electrical posts and triggering a power outage in Baguio City.

Rains also caused Burnham Lake to overflow, while the heavy downpour worsened the condition of Baguio roads, which had been dug up in preparation for repavement.

Despite the strong rains, college students trooped to classes on Saturday because local universities proceeded with scheduled examinations. Despite the heavy rains and strong wind, the city was under typhoon signal No. 1 only.

Kennon Road, the shortest route to Baguio, was closed to traffic on Saturday. Marcos Highway and Naguilian Road were open to all types of vehicles.

Traffic on  Magsaysay Avenue in Baguio City leading to the vegetable trading town of La Trinidad in Benguet slowed down to a crawl. Vegetable delivery trucks, however, were able to drive through an alternative road leading out of the city to Metro Manila.

A landslide has blocked a section of Halsema Highway leading to Mountain Province, OCD reports said.

Power outages were reported in Mountain  Province and Tabuk City in Kalinga, but there was no report of typhoon-related damage or casualty there.

Apayao, which is closest to northern Cagayan, experienced heavy rains, but the province also reported no casualty. Power outages hit the towns of Santa Marcela and Luna, the OCD said.

In Isabela, Gov. Faustino Dy III said the Magat Dam started releasing water.  Its reservoir level was 190.35 meters above sea level on Saturday, still below its spilling level of 193 meters.

Dy said reports from officials in the coastal towns of Palanan, Maconacon, Dinapigue and Divilacan showed no major typhoon-related incidents in those places.

He said only 13 families in Maconacon were taken to evacuation centers as the typhoon battered eastern Isabela.

In Aurora, landslides occurred along stretches of a national road in Barangay Dianed in Dipaculao town on Saturday but these remained passable as heavy equipment started clearing debris, provincial administrator Alex Ocampo said.

No one was hurt in the landslides, he said.

The Auraroa disaster council met Friday and prepared supplies of rice and medicines for the northern towns of the province, he said.

Moderate rains continued on Saturday but fishermen were advised not to sail out until the typhoon leaves the country, Ocampo said.

In Nueva Ecija, officials of the Pantabangan Dam stopped the release of irrigation water from the dam on Saturday after heavy rains fell on the reservoir’s watershed area.

Reynaldo Puno, operations manager of the National Irrigation Administration’s Upper Pampanga River Integrated Irrigation System, said they cut off water supply from Pantabangan so water released from the facility would not worsen flooding in low-lying areas amid the heavy rains.

The dam’s water level was way below itsspilling level.