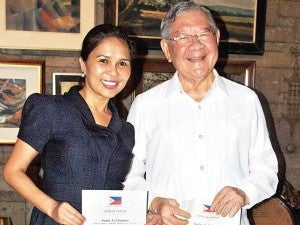 KIDAPAWAN CITY, North Cotabato, Philippines – A former partylist lawmaker who claimed to have campaigned for North Cotabato Rep. Nancy Catamco has called on the lawmaker to fully account for the P9 million she had authorized withdrawn in 2011 from her Priority Development Assistance Fund (PDAF) for what was supposed to be a jatropha project in President Roxas and Arakan towns.

The “Upland Agro-Forestry Development Program for the planting of jatropha Curcas L. and Vermi -Composting” for indigenous communities has been listed as a Catamco project.

Catamco, who chairs the House committee on the indigenous peoples, admitted the implementation of the project had been withheld pending the revision of the memorandum of agreement between the non-government organization she had tapped and the Philippine Forest Corp. (Philforest).

The NGO, she said, had recommended the revision of the project as jatropha would not benefit the IPs of President Roxas and Arakan towns.

“The thing I can assure you is there would be project for the intended beneficiaries and the money is intact,” she said in an earlier interview.

Angelo Palmones, who used to be a lawmaker with the Agham partylist and has rejoined the media, said Catamco must show where the money has gone, to disabuse suspicions she had pocketed it.

The project was among issues of corruption being hurled against Catamco, who called the charges against her “politically-motivated.”

Among those egging Catamco on the “anomalies” was her predecessor, former Representative Bernardo Piñol Jr., who had likened the “scams” she allegedly perpetrated to the one involving Janet Napoles.

The lady lawmaker maintained she was not a scammer and she never met or knew Napoles.

Palmones claimed he had nothing against Catamco as he even campaigned for her in 2010 when she ran against then incumbent Representative Bernardo Piñol Jr.

“As voter of the second district of Cotabato, I should ask where the money went for a project that did not materialize,” Palmones said.

He said he even asked North Cotabato Gov. Emmylou Taliño-Mendoza to ask the lady lawmaker the same question because it is public money.

Based on documents obtained from Catamco, the lawmaker authorized the release of funds for the P13-million jatropha project in Barangay (village) Lama-lama in President Roxas town and in nearby Arakan.

In a copy of the progress report, signed by its president Butch Canoy on Oct. 20, 2011, Peeda said it “has already started its social preparation, including “coordinations with the recipient barangays for identification of farmer beneficiaries,” “survey,” and “consultations and coordinations” with the beneficiaries themselves.

For all this work, Peeda wanted paid for P9 million.

In the same accomplishment report, Peeda said it found out during the “consultations and coordinations” that the beneficiaries did not want jatropha.

“The beneficiaries opted instead to change the products to plant trees like rubber, coffee, coconut and cacao seedlings (sic) since these plant trees are locally grown and endure the kind of weather in their barangays,” the Peeda report added.

Although jatropha, locally-known as “tuba-tuba” is a promising farm product for livelihood project, they are having apprehensions on how to sustain this livelihood activity for the coming years,” according to Peeda.

This was why, Peeda said, it started working on a revised memorandum of agreement with the Philforest for a shift from jatropha to the preferred crops. But even before Philforest could agree to the revised memorandum of agreement, Peeda admitted that: “We are now in the initial stages of the preparation and establishment of nurseries for the preferred crops.”

In her letter to COA Asst. Commissioner Divina Alagon dated Sept. 11, 2013 (not Sept. 13 as earlier reported), Catamco said he was aware of Peeda’s decision to shift from jatropha to other crops.

This was the reason why no jatropha plantation can be found in the two towns, she said. Catamco also said she had supported the shift to other crops because she did not want the project turning into a “white elephant.”

She reaffirmed her position in the letter she sent to Alagon.

“For this reason, the undersigned has been awaiting from the PFC and Peeda the appropriate Addendum to the MOA to address the real needs and preference of the said beneficiaries,” she wrote.

Palmones told the Philippine Daily Inquirer that drawing funds for a non-existence project was “illegal (in itself) and that Catamco should explain why she allowed it.”

Palmones, who is now with dzRH, said revising a government project in the middle of implementation was also irregular.

Catamco said she has been acting in good faith and that she was accountable for her funds and how these were being spent.