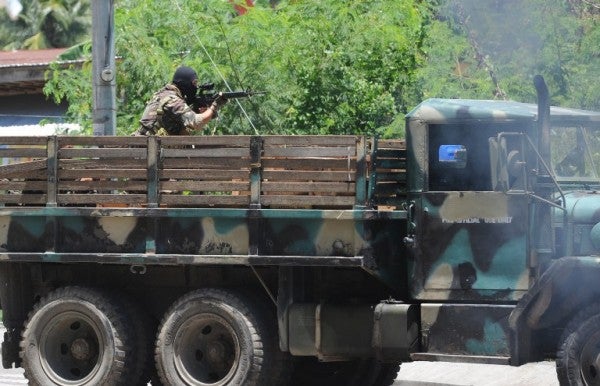 A Philippine soldier on board a truck aims his weapon towards rebel positions as the stand-off between the two sides enters its sixth day in Zamboanga on September 14, 2013. Philippine troops were clearing out the last remaining Muslim rebels after a six-day operation in the south that killed dozens of militants and allowed scores of hostages to flee, officials said on September 14. AFP PHOTO/TED ALJIBE

ZAMBOANGA—Government forces were closing in on Moro National Liberation Front rebel positions and cutting off escape routes Sunday to end a week-long standoff that has left more than 60 people dead in the southern city of Zamboanga, officials said.

“Fighting is continuing as we speak. They continue to resist and conduct offensive actions against us.”

Heavily armed MNLF forces entered the port city’s coastal neighborhoods Monday and took dozens of hostages in a bid to scupper peace talks between another militant group and the government aimed at ending a decades-long rebellion in the south.

But Zagala said the fighting was concentrated in two coastal districts, while other areas were now secure.

Day and night operations by at least 3,000 elite government troops have now seen 51 MNLF rebels killed, as well as six soldiers, a policemen and four civilians.

Air and sea ports remained closed Sunday in a crisis that has paralyzed the city of one million, seen entire neighborhoods razed to the ground, and forced tens of thousands to flee.

Police on Saturday estimated that the gunmen were holding as few as seven civilian hostages, compared to more than 100 a day earlier, with many either escaping or being allowed to go free.

Social Welfare Secretary Corazon Soliman said the number of people who had fled to temporary shelters had risen to more than 69,000 by Sunday morning.

“The number swelled yesterday because thousands more evacuated from areas the rebels were likely to use as escape routes,” she told AFP.

“We hope they will be able to go home in the coming week,” she said, while stressing that it was too early to say if the fighting would be over by then.

The MNLF waged a 25-year guerrilla war for independence before signing a peace treaty in 1996 that granted limited self-rule to the south’s Muslim minority.

Misuari, who has accused the government of violating the terms of a 1996 treaty by negotiating a separate deal with a rival faction, had disappeared from public view shortly before the fighting began Monday.