No ceasefire with MNLF 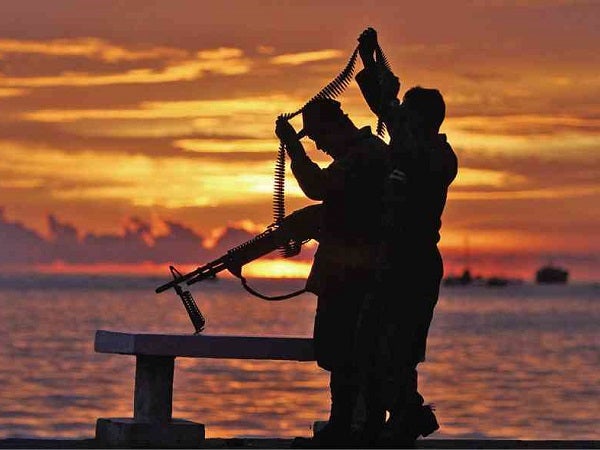 SUNSET WATCH As the sun goes down over the horizon in Zamboanga City, policemen guard the stretch of RT Lim Boulevard to prevent the entry of MNLF reinforcements from the sea. EDWIN BACASMAS

Fighting between government troops and Moro rebels holding hostages in coastal villages in Zamboanga City intensified on Saturday despite reports of a ceasefire taking effect at midnight on Friday.

By late Saturday, government troops had started to advance on rebel positions in a “calibrated” offensive to free the hostages and retake the villages from the rebels.

Defense Secretary Voltaire Gazmin told the Inquirer by phone that a ceasefire had not been declared, contrary to statements by Vice President Jejomar Binay late on Friday.

Binay said he had spoken by telephone to Nur Misuari, leader of the Moro National Liberation Front (MNLF) faction involved in the crisis here, and to Gazmin and they agreed to a ceasefire and talks to resolve the conflict.

The Vice President said the ceasefire was to take effect at midnight.

But Gazmin said there was no ceasefire.

“What I said was there would be a ceasefire only if they (MNLF rebels) would stop firing. Then we will follow suit. They were the ones who started this,” Gazmin said.

Gazmin said the order from President Benigno Aquino III was to ensure that the hostages would be “protected” as government forces moved in to rescue them.

Binay traveled to Zamboanga City on Friday and met with President Aquino at the military’s Western Mindanao Command headquarters.

He returned to Manila in the evening with fighting still going on in Zamboanga.

Binay said his efforts to broker a peaceful end to the conflict failed because both the government and the MNLF rejected conditions each set to halt the fighting.

“It’s a pity,” Binay said when reached by phone after he landed in Manila.

“There was a good start. Both were for peaceful settlement. But the President did not accept the conditions [set by Misuari],” Binay said.

He declined to disclose the conditions, but sources said one of Misuari’s conditions was safe passage for his followers who were boxed in four coastal villages here.

Gazmin said he was not privy to the discussions between the President and Binay and Misuari.

“But I know the President. He would not like that,” Gazmin said, referring to the safe-conduct supposedly demanded by Misuari for his men.

But Gazmin said he met with Binay in Zamboanga City and discussed with the Vice President his ceasefire announcement on Friday night.

“We discussed [what happened] last night. I told him my condition was very clear. They stop firing, we stop firing,” Gazmin said.

One soldier was killed and five others were wounded in the fighting, said Maj. Angelo Guzman of the AFP Public Affairs Office.

The deaths brought the toll from six days of fighting to 53 dead and 70 wounded, more than double the previously announced total as of Friday.

Of the wounded, 35 were soldiers, six policemen, 20 civilians and nine rebels.

Nineteen MNLF rebels have either surrendered or been captured.

In the morning, fighting erupted again in the village, lasting for half an hour. After that, sporadic exchanges of gunfire went on throughout the day.

The national government took over the handling of the crisis on Saturday, with President Aquino personally overseeing the situation, Zamboanga City Mayor Maria Isabelle Climaco-Salazar said.

That meant the city government would deal with the humanitarian problem caused by the crisis while the national crisis management committee would handle the tactical and other security matters, Salazar explained.

With help from the Department of Social Welfare and Development (DSWD), the city government is caring for tens of thousands of evacuees jamming the sports complex and other shelters in the city.

The DSWD said that as of Saturday, the evacuees numbered 62,329.

President Aquino ordered a “calibrated offensive” to stop the rebels from endangering the lives of the hostages, according to Lt. Col. Ramon Zagala, spokesperson for the military.

Gazmin explained that troops were moving to “get the hostages alive and safe.”

He said the military could have launched an attack on the rebels because the armed forces knew the exact positions of the insurgents, but that would not be easy as it might endanger the lives of the hostages.

In Santa Catalina village, where about 100 hostages were being held, the rebels and the soldiers exchanged gunfire and grenade attacks at dawn on Saturday.

Sporadic gunfire rang out in the village throughout the day.

The soldiers were fighting on empty stomachs, military relatives said.

Wives, mothers and daughters of Marines, Scout Rangers, Army, Air Force, Special Action Forces and policemen told the Inquirer that the government troops were getting hungrier by the hour.

A soldier’s wife called the Inquirer asking how military relatives could send food to the troops.

“We are worried here. Almost all of us have received text messages from our husbands that they ran out of food on Friday. They thought this conflict would not last this long,” the wife said.

Another military wife sent a text message to the Inquirer saying, “They’ve been subsisting on water since yesterday (Friday).”

The Inquirer decided to withhold the names of the military wives, as their husbands might become targets for disciplinary action by their superior officers.

At the height of fighting in Santa Catalina on Friday afternoon, some soldiers offered to trade with journalists their cigarettes for water, candies and biscuits.

Capt. Arvin Lawrence Llenaresas of the 7th Scout Ranger Company said some of the troops received bread from some kind-hearted people on Friday, but that was “not enough.”

In Santa Catalina, people gave the troops hard-boiled eggs, noodles, cigarettes, coffee and purified water, but they did not have enough to feed nearly a hundred soldiers.

Some village residents boiled bananas for the troops.

The troops made short work of the bananas, a soldier told the Inquirer.

The policemen had run out of rice.

“Every time we cook rice here, we share it with the soldiers. It’s not nice that we alone eat,” SPO3 Remigio Proceso of the City Mobile Group said. With reports from AP, AFP, Frances Mangosing, INQUIRER.net