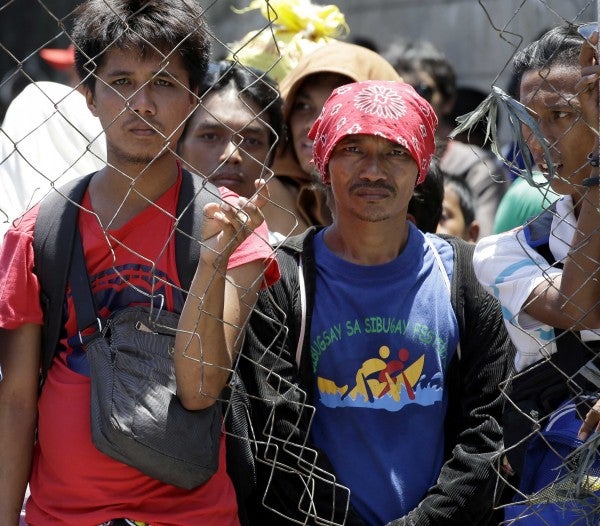 Villagers queue up to board a truck after authorities ordered a forced evacuation as a standoff between the government troopers and Muslim rebels, who have taken scores of hostages and used them as human shields, continues for the fifth straight day Friday Sept. 13, 2013 at Zamboanga city in southern Philippines. The troops have surrounded the Moro National Liberation Front guerrillas with their hostages in four coastal villages since the crisis erupted Monday. (AP Photo/Bullit Marquez)

MANILA, Philippines – The total number of evacuees in the ongoing clash between government troops and Moro National Liberation Front ballooned to nearly 30,000 on Friday.

The Office of Civil Defense in Zamboanga Peninsula said that there were a total of 29,557 persons sheltered at 17 evacuation centers as of Friday afternoon.

A TV report from the ABS-CBN News Channel showed delayed firefight footage, as well as several Red Cross workers wounded and being given first aid.

On Thursday night, residents in the villages of Hondo, Sta. Barbara, Sta. Catalina, Talon-Talon and Mampang were forcibly evacuated after the Zamboanga City government declared an emergency.

The local government said the evacuation was resorted to “when there is either a disaste or emergency and danger or loss of lives becomes imminent.”

The ongoing firefight, with intermittent skirmishes since Monday, has left 22 killed, as per military records. Two from the fatalities were soldiers, three were from police, two were civilians. Fifteen Moro rebels were killed.

Secretary of Presidential Communications Development and Strategic Planning Ricky Carandang said Aquino went there “to personally assess the situation on the ground.”

Read Next
Aquino: Military operation in Zamboanga to continue
EDITORS' PICK
Acer Philippines welcomes you to its first flagship store
No sea row compromises in Sino vaccine talksː Galvez
Is your company a growth champion? Stand up and be recognized!
‘Panic buying’ of vaccine feared may lead to oversupply, wastage
New Year, New Rediscoveries
16 new COVID-19 patients confirmed to be UK variant carriers — DOH
MOST READ
Ate Vi’s message to those against ABS-CBN’s franchise renewal
UST students protest dismissal of Grade 12 student
OVP spokesman tells Mocha Uson: Don’t drag us into your nonsense
LOOK: Duterte registers for the national ID system
Don't miss out on the latest news and information.