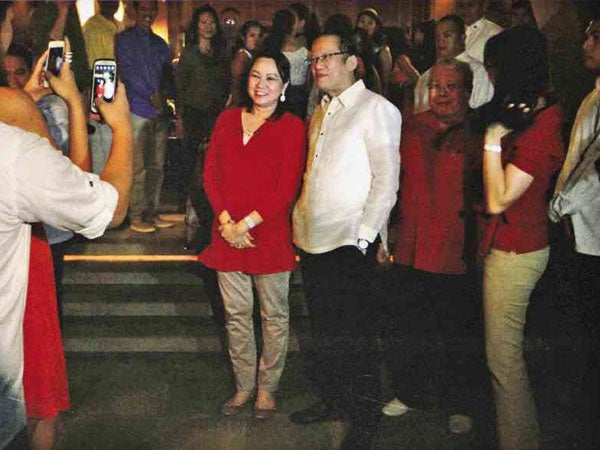 MOTHER OF ALL PHOTO OOOPS! Malacañang releases on Thursday a photo of President Aquino with Janet Lim-Napoles that was taken at a dinner party at Shangri-La Hotel after the Mass celebrating Pedro Calungsod’s canonization on Nov. 30, 2012, in Cebu City. PHOTO RELEASED BY MALACAÑANG

It’s not only the 23-year-old Jeane Napoles who has a photo with President Aquino.

Her parents, businesswoman Janet Lim-Napoles and Jimmy, a retired Marine major, also had a picture taken with the President.

Apparently feeling the pressure to go public with the other pictures, Malacañang—after combing through the presidential photo archives—released all 24 pictures taken at a dinner party following the Mass to celebrate San Pedro Calungsod’s canonization on Nov. 30, 2012, in Cebu City.

That night, Aquino was caught on camera posing with the Napoleses not once but several times.

But many other guests at the dinner also had a field day posing with the President.

A Palace source said the pictures were taken at Shangri-La Hotel in Cebu City.

In line with the policy of full public disclosure, it was Communications Secretary Ricky Carandang who confirmed late Wednesday that Aquino had his picture taken with Jeane, the youngest daughter of Napoles who has flaunted her expensive lifestyle via Instagram, Tumblr and other social media. The accounts have since been deactivated.

Carandang surmised that Jeane was probably one of a dozen or so who had posed for pictures with the President in the same event at the time.

“It’s no big deal,” he said in an ambush interview on Wednesday.

The pictures were released to dispel speculations that the government was deliberately trying to sweep under the rug the President’s alleged links to Napoles, believed to be the architect of the P10-billion pork barrel scam.

Carandang explained on Thursday at a news briefing that it was better for the Palace to release all these photos to the public domain to preclude malicious quarters from using these against the President.

“As I said (on Wednesday), he (the President) was at a function in November 2012 in Cebu and there were maybe a hundred, two hundred people there. There were at least a dozen people who had their pictures taken with him,” Carandang said.

Asked if the appearance of the picture of Jeane and the President on Wednesday night could be an “attempt at misdirection,” Carandang said:  “It seems that way.

“The public has been given revelations about alleged corruption in the spending of the PDAF (Priority Development Assistance Fund). And I think there are certain parties who are trying to misdirect it, for one reason or another, toward the President,” he said.

He explained that the President had never been accused of misusing any state funds.

“The President does not have a PDAF per se, the way that Congress has a PDAF, and so that’s not an issue. It’s an attempt to misdirect the attention of the public,” he said.

Asked at the briefing yesterday to elaborate on this attempt at misdirection, Carandang said: “Well, the picture will suddenly materialize at a time when the President says we are going to be filing charges. The timing is suspicious.”

The communications secretary agreed when told that the release of the photos was a calibrated response from the Palace wary of the photos becoming the subject of different speculations.

“Yes. As soon as it came out, what I said was exactly the truth that this was at a function in November, it was in Cebu, and that someone had her (Jeane) picture taken with him and many people did,” he said.

“We are not hiding anything and I think, if something comes out like that, the best way to address it is to tell the truth and that’s exactly what we’re doing here. We have nothing to hide here,” Carandang said.