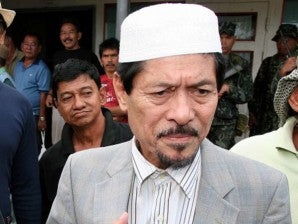 Misuari was immediately blamed for the hostage crisis because his men were seen leading the attack on the city’s coastal villages.

“Last night (Wednesday night) I was able to talk to Chairman Nur Misuari hoping that it would pave the way for the peaceful end of this crisis. What is of interest is that, Misuari disowned the actions of Habier Malik, the leader of the hostage-takers with whom I communicated separately,” Climaco said in a statement.

“I expressed my openness to continue communication with Misuari as well (as) Malik to find peaceful resolution of this conflict,” Climaco said.

Other MNLF commanders associated with Misuari that were sighted in Zamboanga City were Commanders Ugong and Ustadz Asamin Hussein, military reports said.

Malik, a top aide of Misuari, was reported to have been sighted by troops last Monday in Sta. Catalina village.

In February, he led the MNLF to convince the Abu Sayyaf to release its captives including Jordanian journalist Baker Atyani.

In 2007, Malik also held hostage a Marine general and a government peace team for two days in Jolo.

He held hostage then Major General Ben Dolorfino in Panamao town and his team after they demanded more benefits under the 1996 peace accord.

Malik was also linked to the deaths of two US soldiers and a Filipino soldier in a landmine blast in Sulu’s Indanan town in 2009.

Based on military records, he has three warrants of arrest: frustrated murder, murder and attempted murder.

As of 12noon Thursday, there were over 17,000 persons were displaced due to the ongoing standoff between government troops and MNLF members, according to the Department of Social Welfare and Development.

Climaco said another evacuation center is set to open on Thursday due to “mounting” evacuees.

She also assured that “there are more than enough security and food” in their shelters.

Six of 98 villages of Zamboanga City were affected by the standoff.

Climaco also said that she was in continuous dialogues with Ulamas and religious sectors.

“And to stop speculations on the condition of Fr. Michael Ufana, who is one of the hostages in Sta. Catalina—I talked with him over the phone and he says he is well,” she said.

Appeal to key sectors of community and hostage takers

Climaco also asked the business sector to continue selling supplies: “To the business sector –groceries, pharmacies, gasoline stations and other establishments in unaffected areas—please continue to sell supplies. Those in the commercial areas, if you decide not to open your stores, please open alternative stores in safer areas and help keep our city running ,” she said.

She added that she had asked Bangko Sentral ng Pilipinas executives ‘that they find creative ways to open in unaffected areas and secure approval from your senior management offices so that our people can transact business, as our people need additional supply of funds. ”

“The same call is issued to the pawnshop operators and remittance centers,” she said.

To doctors, she pleaded that they remain in hospitals “because you are needed to serve patients who have medical needs in these very trying times. ”

“To the barangay (villages) leaders and to the neighborhood leaders like lawyers, accountants, businessmen and all others—organize yourselves as a barangay network group to secure your local from rumors spreading around. Your neighbors and your community are looking after your leadership,” she said.

To religious and spiritual leaders Climaco asked to “please pray for the safety and wellbeing of the hostages and to help end this very, very sad situation.”

For the hostage takers, Climaco also appealed to “please let go of the hostages especially the elderly, the sick, the children and people with disabilities. ”