MNLF commanders not sold on Misuari-led occupation of Zamboanga City 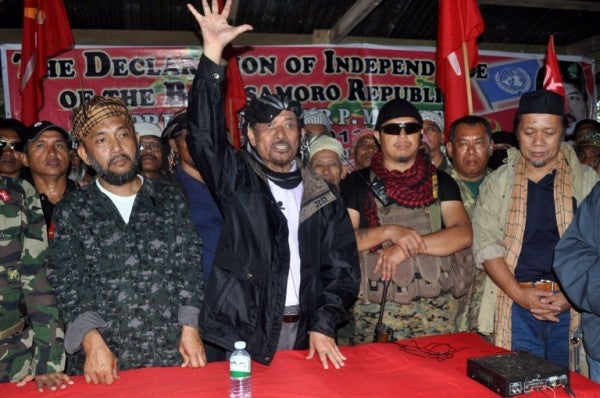 In this photo taken on August 12, 2013, Moro National Liberation Front (MNLF) leader Nur Misuari (C) addresses his armed followers in one of their camps in Indanan, Sulu, on the southern island of Mindanao, following his declaration that he was breaking away from the government because he believed they were sidelining his group. Followers of Misuari entered the coastal area of Zamboanga city by boat at dawn on September 9, triggering clashes that left at least one soldier dead and six wounded, the military said. AFP

DIGOS CITY – Moro leader Nur Misuari has apparently failed to rally MNLF commanders in other parts of Mindanao to take up arms anew as skirmishes remained confined to Zamboanga City, as of Wednesday.

While other Moro National Liberation Front commanders in North Cotabato and Maguindanao, remained on a wait-and-see strategy, those in other areas were clearly against taking up arms against the Philippine government.

Violence will not solve the problem, according to MNLF Brig. Gen. Tahyrr Naga, provincial chair of the MNLF in Davao del Sur, a Christian-dominated province with an estimated MNLF membership of over 20,000 armed and unarmed men and women.

“There’s no other means to achieve peace aside from the negotiation table,” Naga, an MNLF commander for the past 45 years, said.

He did not see ordering his men to fight with the Misuari-led MNLF faction in Zamboanga City.

But Naga said his men would fight back if provoked.

“We will just wait and see. Our unit will only fight if provoked. Local officials of Davao del Sur are closely coordinating with our group. So, there’s no reason why we will wage war against them,” Naga said.

He also asked for sobriety.

“Let us remain calm and continue to support the peace efforts of our local officials,” Naga said.

MNLF Davao City chair Rolando Olamit said the local MNLF would do nothing to compromise security there.

“We support (Mayor Rodrigo) Duterte’s campaign for peace but we are also hoping that the fire would not reach Davao City,” Olamit said.

Olamit added that MNLF members in the Davao region were not mobilizing.

MNLF spokesperson Emmanuel Fontanilla confirmed that the movement of their men was confined in Zamboanga alone.

“(But) we are on a defensive posture. However, if under attack we will respond,” MNLF spokesman Emmanuel Fontanilla told a radio station in Cotabato City.

Fontanilla said they felt betrayed because the Zamboanga movement was initially for a caravan in Zamboanga city.

“We did not carry out attacks. We have movements to secure our chairman for a peace rally. Our plan is to coordinate with authorities but they attacked us instead,” he said.

Olamit warned of a third party that could use the situation to create chaos in Mindanao.

He said that in Davao City, his men have been on a tight watch for “third parties who might enter the city and create chaos and blame it on the MNLF.”

Gov. Mujiv Hataman of the Autonomous Region in Muslim Mindanao had flown to Zamboanga to help defuse the tension, according to ARMM executive secretary Laisa Alamia.

Alamia also said based on their assessment, “The situation is manageable.”

But Muslimin Sema, who chairs an anti-Misuari MNLF faction, said he believed the Organization of Islamic Cooperation (OIC) “must intervene in the crisis before it’s too late.”

He said the participation of the OIC could also lead to release of the supposed hostages.

“The government should talk with Misuari and find out why the situation become like this,” Macapaar, who was accused of leading attacks on civilian communities following the failed agreement of 2008, said.

Olamit said the cause of the problem was really the government’s failure to fully implement the 1996 agreement it signed with the MNLF.

Presidential Adviser on the Peace Process Teresita Deles said the MNLF’s ranting was aimed at a “malicious campaign to mislead the public.”

“The armed aggression by the sanctioned by some leaders for the MNLF-Misuari wing tries to insinuate the public that the Philippine Government has already terminated the Final Peace Agreement (FPA) that the MNLF led by Misuari signed with the GPH in 1996,” Deles said in an emailed statement.

She said on the contrary, the government wanted the “completion of the almost six-year Tripartite Review Process on the implementation of the 1996 FPA, to pave the way for the Agreement’s full implementation.”

Deles also described the Misuari-led MNLF as “spoilers” of peace.