Forecaster says Mindanao should learn to prepare for extreme weather 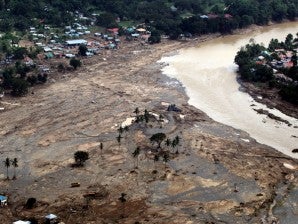 MANILA—Just as Metro Manila residents are learning to brace themselves for storms, it’s time now for residents of Mindanao to follow suit, a top weather forecaster said.

Rene Paciente, chief of the weather forecasting section of the Philippine Atmospheric, Geophysical and Astronomical Services Administration (Pagasa), said Mindanao residents must learn to anticipate extreme weather events and take lessons from the destruction of Storm “Sendong” in 2011 and Typhoon “Pablo” in 2012.

“We have seen how Metro Manila is now more prepared than before,” he said, citing the storm-enhanced monsoon episode in August in which relatively fewer people were affected, compared to Tropical Storm Ondoy in 2009 and the monsoon rains of 2012.

“In fact, only one person directly died from the storm,” Paciente said.

He said the people of Mindanao, a place not typically on the path of cyclones, must also embrace the same level of disaster preparedness and prepare for the unexpected.

But Paciente clarified that he did not believe a strong storm would hit Mindanao for a third December in a row (both Sendong and Pablo struck in December).

“It used to be that storms hit Mindanao every 10 years. So when Sendong hit, that was not really unusual. What was unusual was when another strong typhoon hit the following year, and that was Pablo,” he said.

“That might well have been a fluke. We cannot conclude as of now that Mindanao is now going to be on the regular receiving end of storms,” he said in an interview.

The death toll from Typhoon Pablo reached 1,067, with another 800 missing, according to the National Disaster Risk Reduction and Management Council. Damage to property reached P36 billion.

Storm Sendong left at least 1,260 dead, with another 182 missing, and destroyed P1.4 billion in crops and property.

In an earlier interview, Rosalina de Guzman, chief of the climate data section of Pagasa, said extreme weather events were on the upswing in a trend attributable to climate change.

“In terms of intensity and frequency, we are seeing an increase in extreme weather events,” she said.

De Guzman said Filipinos should anticipate rainfall episodes “greater than 300 millimeters, ”similar to the flooding in Metro Manila that resulted from Ondoy in September 2009, and the torrential monsoon rains in August last year.