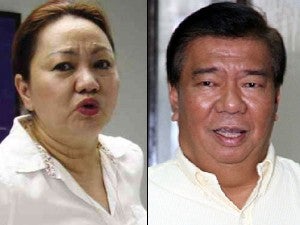 “I know her socially. I don’t know her business,” Drilon said at a press conference in the Senate.

“I meet her socially in parties. It’s possible there are photos of those meetings because you know as politicians, we always take pictures,” he said.

Drilon said he had met Napoles, who was at the center of the “pork barrel” scam,  probably three to four times in social gatherings so he would not be surprised if there were more pictures of them that would later come out.

He issued the statement following a television report Monday night, showing pictures of him and his wife together with Napoles in one dinner they attended at the Heritage Park.

Drilon also admitted knowing  Napoles’ husband, who was  also seen with him  in another picture.

“Yes. I knew him as the husband of Napoles in that gathering. He was introduced to me,” he said.

But the Senate leader reiterated that neither a single peso went to Napoles’ NGOs nor had they any discussion about her NGOs or his Priority Development Assistance Fund (PDAF) , also known as “pork barrel.”

“There’s clear effort to implicate me as guilty by association with the picture shown last night on television,” he said.

“Let me make it very clear that none of my PDAF allocations was ever assigned or given to any projects of Napoles or any of her NGOs,” he said.

Drilon recognized  his shortcoming  when he failed to immediately reveal to the public that he knew   Napoles.

“Maybe that’s a shortcoming that I had, but that doesn’t make me guilty of using her NGOs. Maybe looking back, I should have revealed it because I did not use any of her NGOs,” he said.