MANILA, Philippines – The military has been monitoring movements of the Moro National Liberation Front three days before the encounter and standoff in Zamboanga City early Monday.

This led to the clash early Monday which killed one soldier, a police officer and several others.

Zagala said the troops were armed with high-caliber firearms and were able to prevent the guerrillas from reaching other villages.

“As early as three days ago [when] they came to Zamboanga City…we have prepared for possible contingencies that may happen,” he told reporters.

He said some of these MNLF members that arrived three days ago entered Zamboanga City unarmed. 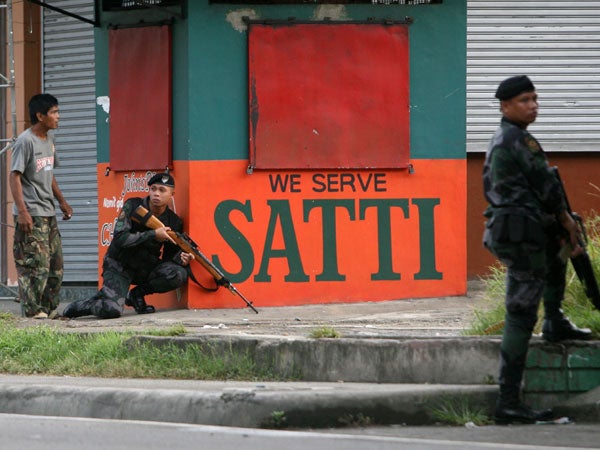 “We have information that the MNLF is planning to hold mass action in Zamboanga, but again if you recall a few weeks back they did also have mass action in Davao and it was peaceful but of course we cannot [rule out] the possibility that there may be armed so we prepared for that,” he said.

The MNLF came in different groups and entered separately at different points.

“We already have a finality in the peace process with them, and the last thing we want them to think is that we are harassing them and if they are entering unarmed, what we can do is monitor them only,” he also said.

All armed forces units in the Western Mindanao area were on alert as of Sunday night, he added.

Read Next
US couple accused in death of adopted daughter
EDITORS' PICK
Climate Change Commission and Nestlé PH to discover sustainability-focused solutions
Isko Moreno bares ‘two-pronged’ approach to rehabilitate MSMEs
What’s at stake for every fighter at ONE: NextGen
‘Flattered’ Pacquiao to push through with presidential bid after being eyed as VP
Legarda emphasizes role of ICC/IPs in nation building this IP month
Gordon calls 2 Pharmally execs ‘Senate fugitives’ after no-show in probe
MOST READ
Drivers with no traffic violations can now renew licenses for 10 years
Yang’s Princeton degree raises eyebrows among senators
Gordon to Duterte: You? Teaching me courtesy?
LJ Reyes says Paolo Contis made ‘no efforts’ to talk to her after their split
Don't miss out on the latest news and information.