Secret of Asik-Asik falls out 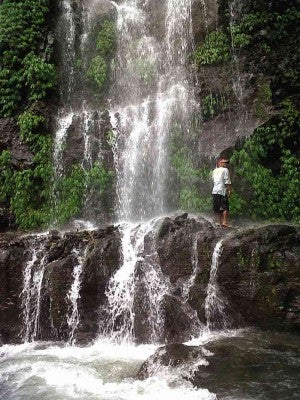 KIDAPAWAN CITY—The beauty of the Asik-Asik waterfalls in Alamada town in North Cotabato had remained hidden from the public eye until its photo went viral on the Internet.

Gushing out from a cliff at the edge of a 200-meter flattened hill, water crashes down in what seems to be music to the ears of anyone close to it. Where the water comes from is still a mystery.

A photograph of the waterfalls taken by Quezon City freelancer Ernestina Jacinta was adjudged one of three grand winners in the national photo contest sponsored by the Philippine Amusement and Gaming Corp. (Pagcor) in July.

The state-owned Pagcor received 5,500 entries from both amateur and professional photographers all over the country but only 48 made it to the final cut for judging on July 5. The grand winners were chosen in the following categories: people, customs and traditions, nature, and structures and historical landmarks.

Each of the grand winners received P75,000 cash and a trophy.

“With what I saw in the exhibit, I can say there are still a lot of undiscovered natural wonders in the country,” said Cristino Naguiat, Pagcor chair and panel head of judges. He said his work was challenging because almost all of the photos showcased the Philippines’ unique character, fun, beauty and tradition.

North Cotabato Gov. Emmylou Taliño-Mendoza lauded Jacinto for “exploring” the province and choosing the Asik-Asik waterfalls as an entry to the competition. “I feel so delighted that Asik-Asik has brought another wonderful chronicle to the history of North Cotabato,” she said.

A former mayor of Alamada, Bartolome Lataza, said the Asik-Asik waterfalls were accidentally discovered in late 2010 by a village councilor, Jun Miranda.

It is still difficult to reach Sitio Dulao, about 20 kilometers from the town proper, as the roads are still being developed. Visitors have to take the “habal-habal (motorcycle)” and travel for about an hour. From a spot, they have to walk a kilometer through rolling hills and large stones.

Before Miranda saw the beauty of the waterfalls, a series of events had occurred in the area, such as forest fires and landslides that toppled trees and bamboo groves. He said the villagers had known of water rushing out of mountain walls but did not mind it, as the area was thickly forested.

Miranda reported his find to the barangay council and it was only then did the local officials rushed to Asik-Asik to enjoy the spectacle themselves.

Photos and videos of Asik-Asik became viral in social networks.

The municipal and provincial governments have temporarily closed the ecotourism site to the public, as road construction and site development are under way. They expect to reopen the place by the end of the month.