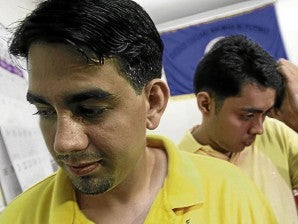 THREE YEARS. Jorge Joseph (at left) and Richard Brodett leave the court following their acquittal in a high-profile drug case on Friday. They were detained a total of 2 years and 11 months. NIÑO JESUS ORBETA

A “glaring blunder” in the handling of evidence has led to the acquittal of two of the so-called “Alabang Boys” arrested in 2008 for the alleged possession and sale of 60 “ecstasy” tablets.

“That (breach) in the chain of custody of evidence became a fatal flaw,” Justice Secretary Leila de Lima said Friday after a Muntinlupa Regional Trial Court judge dismissed the charges against Richard Brodett and Jorge Joseph, citing the prosecution’s failure to prove guilt beyond reasonable doubt.

Relatives of the two young men gave out a whoops of  relief and joy after the court handed down the verdict, ending a two-year, 11-month legal battle marked by charges of bribery and the intervention at one point of then President Gloria Macapagal-Arroyo.

In a prisoner’s yellow garb, Brodett, 28, and Joseph, 25, stood silently before Judge Juanita Guerrero as the verdict was read.

“It’s a surprising development,” De Lima said of the decision clearing Joseph and Brodett because of the failure of antinarcotics agents to follow the rules on taking care of the evidence.

De Lima said she had asked Prosecutor General Claro Arellano to furnish her with copies of  the documents in the case  “to see what exactly were the difficulties and problems.”

“There are so many cases similar to this which were dismissed because of the same technicality,” she said.

“I will tell you straight. We knew about the decision of the court even before it came out. Draw your own conclusions about how we knew,” a dismayed former Philippine Drug Enforcement Agency (PDEA) chief Dionisio Santiago told the Philippine Daily Inquirer.

Santiago would not elaborate on his cryptic remark. 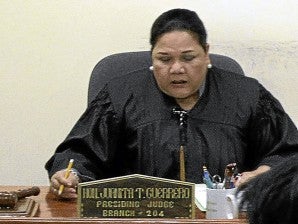 JUDGE GUERRERO: The failure of the prosecution to establish all links in the chain of custody fatal to the case. NIÑO JESUS ORBETA

It was Santiago’s men who nabbed Brodett, Joseph and another coaccused, Joseph Tecson, on Sept. 19, 2008, for alleged drug possession.

De Lima also said she had ordered the Quezon City prosecutor’s office to submit the status of the case against Tecson.

In her 46-page decision, Guerrero questioned the handling by PDEA officials of the assorted illegal drugs they said they seized from the suspects during a buy-bust operation.

The court noted that during the trial, PDEA forensic chemist Rona Mae Aguillon had testified receiving six plastic sachets of ecstasy tablets—each sachet containing 10 tablets—for laboratory analysis around 12:15 p.m. of September 20, or the day after the arrests.

She said it took her about 16 hours to complete the examination of the tablets.

But the court also noted that while the tablets were supposedly being examined by the chemist,  Santiago held a press conference on the afternoon of the same day and showed the media the tablets he said were taken from the “Alabang Boys.”

A newspaper photograph of the press conference, published the day after, was shown at the trial.

The court questioned how PDEA could have presented the tablets to the media if they had been in the possession of and being examined by the chemist.

The discrepancy left the court “in a quandary,” the decision said.

The chemist acknowledged the “apparent inconsistency” when confronted with it.

From the newspaper photograph, the court also noted a “difference” between the table on which the ecstasy tablets were laid during Santiago’s press conference and the table holding them during  PDEA’s official  inventory of the evidence.

The court left open the possibility that the tablets may have left the chemist’s possession during the time she was supposed to have been examining them. 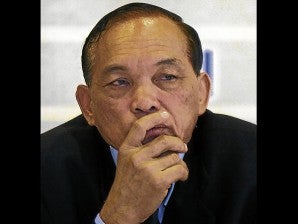 SANTIAGO: We’re convinced they were doing something (illegal), so now it’s on their conscience. INQUIRER PHOTO

“The link in the custody of the drug evidence has been broken,” it said. “The failure of the prosecution therefore to establish all the links in the chain of custody is fatal to the case at bar.”

“The court cannot merely rely on the presumption of regularity in the performance of official functions in view of the glaring blunder in the handling of the corpus delicti (body of the crime) of these cases.”

The court said that precisely because “of the built-in danger of abuse it carries, a buy-bust operation is governed by specific procedures on the seizure and custody of drugs.”

Thus, it said, “the chain of custody requirement is necessary to remove doubts” on the integrity of the evidence.

Relatives of Brodett and Joseph uttered a cry of relief upon hearing the word “acquitted” after a 30-minute reading of the judgment. Two court employees took turns in reading the decision.

The relatives declined to be interviewed, but they were teary-eyed as they hugged each other.

PDEA agents arrested Brodett and Joseph inside  posh Ayala Alabang Village on the evening of September 19 during an entrapment operation.

A search of Brodett’s car yielded other ecstasy tablets, sachets of cocaine and dried marijuana leaves, according to the PDEA.

The case provoked controversy after the Department of Justice  initially dismissed the charges and PDEA officials insinuated the prosecutors had been bribed.

Then President Arroyo stepped in and ordered a review of the case. Charges were eventually filed in court.

Santiago  said he respected the decision and acknowledged “there’s nothing we can do about it anymore.”

“We’re convinced they were doing something [illegal], so now it’s on their conscience,” Santiago said in a phone interview. He said  PDEA’s legal team and the prosecutors had built a strong case against the defendants.

But he  said he would rather look at the positive aspect case.

“Now they are to be let out. They’re intelligent, so perhaps they can become productive members of society. On the other hand, they may return to their old ways,” he said.

“They know what they did. We know what we did. Now it’s all on their conscience,” Santiago said.

In the Tecson case, the prosecution is still in the process of presenting evidence. Tecson  is detained at the Quezon City jail. With reports from DJ Yap and Julie Aurelio